Key trends that shape the jobs-housing balance and exacerbate accessibility to housing and transportation provide insights into finding sustainable solutions for the future. The following factors are playing an important role in how these challenges have been evolving and will likely continue to evolve and shift in the future.

School quality has played an incredibly large role in where people choose to live on the Peninsula. In a recent Nextdoor survey of Burlingame and Hillsborough residents, 68 percent said that school quality was a factor that drew them to their neighborhood, as compared to diversity (14.3 percent), freeway access (32.1 percent) and a variety of other factors. Indeed, school quality often is directly related to housing size. Because single-family homes tend to be larger, property taxes (the biggest source of school funding), which are correlated to housing size, are higher.14

Another factor is planning practices. Historically, when planners began drawing districts for certain school districts, they often separated multifamily homes from single-family homes, which effectively prevented non-white races (who often lived in the multifamily homes) from attending schools together with white people.15 Across the Bay Area, this pattern holds true. For example, the quality of public schooling in Hillsborough, one of the wealthiest Bay Area neighborhoods, is far greater than the quality of schooling in East Palo Alto.16

As more and more parents seek the highest-quality schools, housing demand in places like Hillsborough, Los Altos and Menlo Park continues to surge higher, while demand declines in locations with less desirable schools, such as East Palo Alto and eastern portions of Redwood City. Housing Matters, a project of Urban Initiatives, conducted research on the link between school quality and where people choose to live and found that socioeconomically well-off families were “more likely to move to a higher-quality school zone compared with middle or lower-class families.” They concluded that “the need for access to good jobs in central locations that is driving the lack of affordable housing shows that access to housing and access to opportunity are inextricably linked, which affects future intergenerational mobility.”17

Thus, as we consider a more equitable Bay Area, it is necessary to address school funding and location to ensure families living in all kinds of homes have ample and equal opportunity to succeed in higher education. This is not an easy problem to solve. Often, while increased funding to underfunded schools leads to an improvement in their quality (desired consequence), it can also backfire by making that newly improved school zone less affordable (unintended consequence) due to increased desirability. This change can lead to “pricing out” current residents, mostly due to rent increases, and gentrification of entire neighborhoods.

Overall there is a clear, positive correlation between home value and school quality. 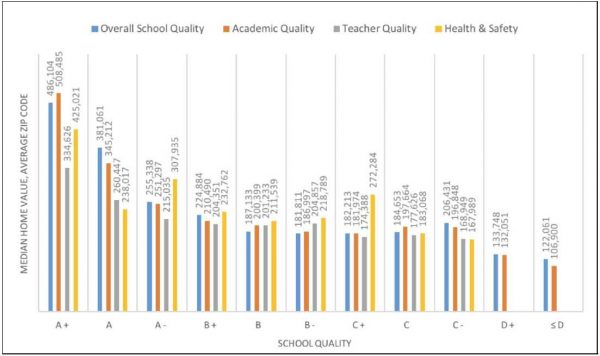 The housing affordability crisis has been a key factor causing a rapid change in mobility from one geographical place to another, in part due to shifting attitudes regarding home ownership. Pre-pandemic, home ownership rates hit a seven-year low,19 while the share of renters continued to increase. Renting has become far more financially stable, but has left people moving more frequently. Interestingly, in the last 10 years the average length of home ownership has increased,20 but the number of homeowners has decreased, putting more homes on the market, both for sale and for rent, and contributing to greater sprawl.

With its ever-increasing high cost of living, San Francisco has been seeing a trend toward exodus, both to nearby suburbs and other states.21 Driven in part by a work-from-home culture as a result of the pandemic, and also by rising rents and the overall aging of the population, the mass exodus shows no signs of abating and will continue to shape the mobility of those finding a place to live. Instead of living in long-term neighborhoods – particularly those with duplexes, triplexes or a mix – many people continue to shift into rapidly changing, dynamic communities. As workers become scarcer and traffic gets worse in San Mateo County, some employers are pulling up stakes and moving elsewhere, too. It is important to consider mobility moving forward as mobility trends continue to shape the home market in the Bay Area.

City of Work Compared to City of Residency

According to the American Community Survey for 2018, there were 416,647 individuals then working who called a location in San Mateo County their workplace. Of those same individuals, there was a deficit of almost 24 percent (98,312 people) who did not live in the actual city or unincorporated area where they worked. For example, someone might work in Menlo Park, but live in San Mateo, Oakland or San Jose.

If every worker who did not live in the San Mateo County city of their employment were provided a home in that city, construction of an additional 65,000 homes would be necessary, based on the assumption that one home is occupied by 1.5 people who work. Of course, a lack of housing does not argue for displacing enough people to provide housing for others. Rather, it is a possible cause of traffic congestion, and an indicator of unbalanced job distribution.

With fears of automation looming, many policy experts suggest that a transition to green jobs is necessary to retain the current stock of jobs while also promoting sustainability.22 Indeed, green jobs can range from low-skill positions such as a ride-share driver (of electric vehicles or other renewable-source vehicles) to high-skill positions such as a data analyst. A report in Los Angeles County found that the county’s green economy could grow from 338,000 to 600,000 green jobs by 2050, far higher than the rate of growth in other sectors.23

As green jobs continue to grow, it is likely there will be ample opportunities for individuals looking for a job to find one, but the question of housing remains. Housing demand remains at an all-time high, but the supply has stayed relatively fixed. Post-pandemic, it is especially important that new positions come to the market considering how many have been lost during the pandemic. “Deep green” jobs – ones with a direct impact on the environment – are a prime example of an easy fix, and it is estimated that if states pursue providing deep green job opportunities, 14.3 million new jobs could be added to the U.S. economy.24 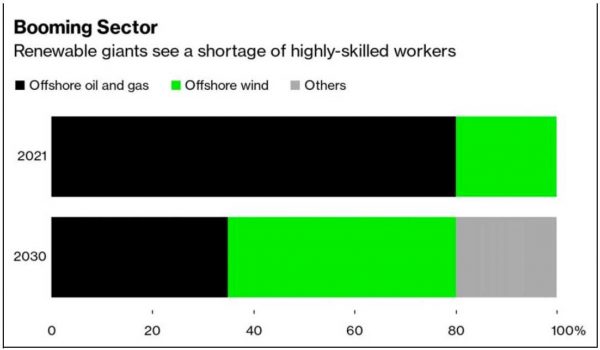 COVID-19’s impact on the U.S. labor market is unprecedented. Over the last year and a half, traditional work patterns have changed rapidly and drastically. In response to the pandemic, the majority of employees whose jobs could be done entirely remotely (47 percent of all jobs, equating to 195,218 jobs in San Mateo County, according to a study from the Bay Area Council Economic Institute (BACEI) published in September 202026), started to work exclusively from home. Prior to the pandemic, it is estimated that only about 7 percent of U.S. employers offered the option of telework to their employees. This was a major shift that could affect future housing needs.

Along with an uptake in remote work, more and more employers have been offering flexible work schedules. This response was due to employees’ desire for more flexibility to alleviate some of the additional burdens facing them due to the pandemic, including the lack of adequate childcare or having to care for an elderly family member at home.

Today most companies, including the top 25 employers27 in San Mateo County, have started to plan for a return to work after the pandemic. The question remains if remote work and flexible work schedules are here to stay – with their accompanying consequences, including their impact on the jobs-housing imbalance and commute.

A survey conducted by PwC28 in November and December 2020 of 133 U.S. executives and 1,200 U.S. office workers from a range of industries found that remote work has been an overwhelming success for both employees and employers. A whopping 83 percent of employers said that the shift to remote work had been successful for their company. A little more than half of the employees (55 percent) said they preferred to stay in remote mode post-pandemic. Most executives surveyed expected options for remote work to stay, while pointing out that some presence at the office (three days per week for 29 percent of the respondents) is necessary to maintain a strong company culture.

In addition, the Bay Area Council (BAC) conducted a six-month-long survey of Bay Area employers to see what their plans are regarding a return to work post-pandemic. Findings so far from the monthly surveys conducted between April 2021 and the end of September 2021 show that while employees were overwhelmingly coming into the workplace five or more days a week pre-pandemic (about 70 to 76 percent of responses), this trend has reversed, from 72 percent of all respondents working remotely in April 2021 to 41 percent of all respondents in working remotely in September 2021. The fully remote work trend has been decreasing over the past months, with a drop of about 30 percent between April and September of employers who indicated their workforce was still fully remote. At the same time, there has been a corresponding trend of people returning to their workplaces (in September, close to 60 percent, with most of the people returning at work now spending about three days a week at the office (17 percent). 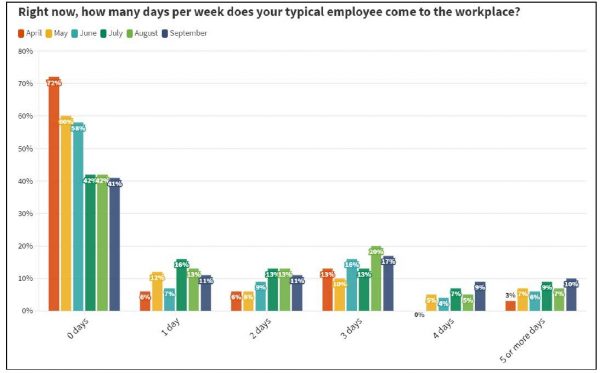 This three-days-a-week presence at the office is consistent with what surveyed employers expect for a post-pandemic return to work, with about 40 percent of all respondents expecting workers to come to the workplace three days a week. The survey didn’t specifically ask employers where they anticipate their employees will be on the days they are not in the workplace. They could be working from home, traveling to meetings, working from a coffee shop, utilizing more localized co-working spaces, etc. Thus, the overall impact on traffic is hard to fully predict. 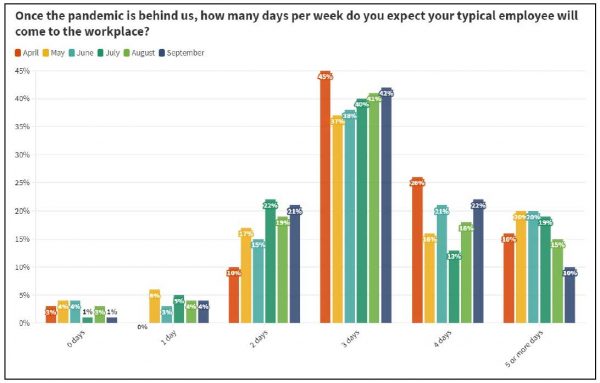 In terms of planning how employees will return to the workplace, in September 2021 about 66 percent of all respondents had developed most or all of their return plans, with only a minority (6 percent) being in the very early planning stages, while none reported not having started yet.

Other recent developments and trends worth mentioning include some companies exploring moving from a five-day workweek to a four-day one (a total of 32 hours of work per week, not 40 hours spread over four days). The crowdfunding platform Kickstarter, for example, recently announced a pilot four-day workweek to begin in 2022 to see if the purported benefits in terms of increased engagement, productivity and overall happiness and health of employees hold true. It is worth noting that such novel, flexible ways to work are widely available in some other countries around the world, as illustrated by Iceland, where 85 percent of workers have the option of working just four days a week. Sweden, New Zealand, Spain and Japan have all been exploring a shorter workweek as well.

While all the data and surveys to date seem to indicate that a post-pandemic return to work might improve the jobs-housing imbalance by allowing at least some people to fully work remotely and thus have a bigger choice as to where to live, it is still too soon to fully grasp the ramifications. In addition, the uncertainty regarding whether COVID-19 will continue to affect mobility will also play a big role in when and how people will return to their workplaces.