History has value, but presenting the historical perspective of the current housing crisis in San Mateo County is no routine matter. Understanding how the San Mateo County housing crisis has evolved may be confrontive and difficult to accept. However, a failure to understand that history will result in a lost opportunity to move forward and improve the situation.

The current housing situation has more than 250 years of history that have slowly built the reality of today’s housing inequity. The housing crisis we are grappling with has its roots in the displacement of indigenous populations from the late 1760s, land ownership by wealthy families beginning in the 1800s, and exclusivity of white ownership through exclusionary zoning and restrictive deed covenants beginning in the 1950s. These historical factors, coupled with rapid population growth and inadequate and uncoordinated housing and transportation construction, provide a deep understanding of the problems as well as possible solutions.

The earliest residents of San Mateo County 1 are generally described as the Ramaytush Ohlone. This group was made up of at least eight separate, smaller groups with their own language dialects and uniquely named villages of mostly Ramaytush Ohlone, but also including Awaswas, Muwekma and Tamien peoples. All of these groups practiced basic subsistence living (gathering, harvesting, fishing and vegetation burning to improve use of land).

While villages typically consisted of collections of individuals within small areas of San Mateo County, there was no concept of land ownership; land was to be used for the collective good. Thus, in the years after the Spanish arrived, there was no treaty transferring property to Spanish, Mexican and European landowners. The land was simply taken and distributed through land grants, and then sales, to wealthy families.

At the time of the arrival of the Spanish around 1750, there were approximately 325,000 indigenous people spread throughout California. This is the group that the first Europeans found, including several thousand in San Mateo County. The arrival of Spanish explorers and missionaries in the late 1700s was a major threat to Ohlone existence and culture as a result of forced cultural and religious assimilation, exposure to European diseases, and harsh and unsanitary living conditions. When California became part of the Union in 1850, after the Mexican-American War, the state government sanctioned the mass genocide of indigenous populations throughout the state by local militia in the wake of the Gold Rush. By the 1880s, the Bay Area Ohlone population was dramatically reduced, with their land almost entirely taken away.

First the Spanish, then the Mexican government, granted large tracts of confiscated land (ranchos) to private owners to encourage settlement and development. The names of some of the ranchos from this period are still reflected today in place names in San Mateo County, including San Mateo (now the City of San Mateo and parts of other cities), Buri Buri (now Burlingame), Pulgas (Belmont and Redwood City), San Francisquito (now Menlo Park and parts of Santa Clara County, and Pescadero (unincorporated areas along the San Mateo County coast). Land grants and patents account for 200,000 acres of the current 300,000 acres of San Mateo County – a staggering two-thirds of the entire county!

Land along San Francisco Bay that was later filled and land not suitable for cattle or farming were not included in the land grants and patents. Thus, land confiscated from the indigenous peoples wound up as the land where our homes currently exist. 2 As the lands from the Spanish Ranchos were sold off, towns began to form.  Redwood City was incorporated in 1867, San Mateo in 1889, and from then until 1983, when East Palo Alto was incorporated, a total of 20 separate, independent cities were created on confiscated land grant areas.

Improvement in Transportation, Increase in Development

The opening of railroad service in San Mateo County in the 1860s attracted many wealthy San Franciscans who could afford rail travel. San Mateo and other county cities became ideal places for building summer and weekend homes for the well-to-do who lived and worked in San Francisco. The population that resided in some parts of the county was largely made up of people employed in the service of great mansions. During this period, the wealthiest estate owners bought up large parcels of land from land grant parcels, keeping the majority of San Mateo property owned by a few families.

As San Mateo County developed rapidly between 1950 and 1970, housing for workers in support jobs in San Francisco was constructed nearby in cities such as Daly City. Housing for lots of employees in steel fabrication plants and meat slaughtering/packing factories in South San Francisco was built in that city. Many workers in adjacent small-scale electronics factories and aircraft maintenance at San Francisco International Airport found homes in San Bruno and Millbrae.

Highly skilled professional jobs in Palo Alto and Menlo Park were supported by housing there. Workers providing support services often found housing in Redwood City, while highly skilled professional workers flocked to Hillsborough and San Mateo. Cities at the time could provide sufficient housing for most, but chose to develop and sell houses to mostly white workers, regardless of anyone of color’s ability to pay.

A blow to affordable housing was the dissolution of redevelopment agencies in 2012, which used tax-increment financing to spur development, particularly low-income housing, in blighted areas. Opponents complained the program was being misused to fund for-profit projects. 4  Subsequent attempts to resurrect redevelopment have failed.

Within San Mateo County and the rest of the Bay Area, limitations were placed on who could buy homes. In the City of San Mateo for example, builders constructed the residential Hillsdale and San Mateo neighborhood for whites only in the mid-20th century. Public records reveal that the 1941 deeds for new homes contained exclusionary clauses such as: “No persons other than members of the Caucasian or White race shall be permitted to occupy any portion of said property, other than as domestics in the employ of the occupants of the premises.”

Image of a restrictive covenant clause within property deed

These racial exclusions were present in the majority of homes in San Mateo and neighboring cities. Developers across San Mateo County created both luxurious and middle-income, white-only neighborhoods, sometimes even restricting people of a certain religion from owning homes there. When a racially integrated community attempted to be developed, there were aggressive efforts to stop construction and further exclude people of color.5

According to the compliance handbook of the Federal Housing Administration, redlining is the process used by lenders to restrict certain land areas from ownership by Blacks primarily, but also by Blacks, indigenous and people of color (BIPOC) generally. Although currently illegal, redlining was historically practiced throughout the Bay Area, including in San Mateo County. Specifically, it was a federally backed process that denied creditworthy applicants loans for housing in certain neighborhoods due to their ethnicity. The term was coined from the red or “hazardous” areas of cities that were deemed risky to invest in, due to their specific racial demographics. Redlining led to cycles of disinvestment even after the Fair Housing Act of 1968, which officially banned redlining.

Local realtors report that such redlining practices were limited to cities of over 40,000 in population. Although few cities in San Mateo County were that size when redlining was rampant (notably Redwood City, San Mateo and Daly City may have been large enough), there were plenty of other ways in which cities could restrict who lived where. For example, a real estate appraiser could mention that a certain house being considered for a mortgage was in an area of “hazard” (code for non-white areas), which had the same impact as redlining. 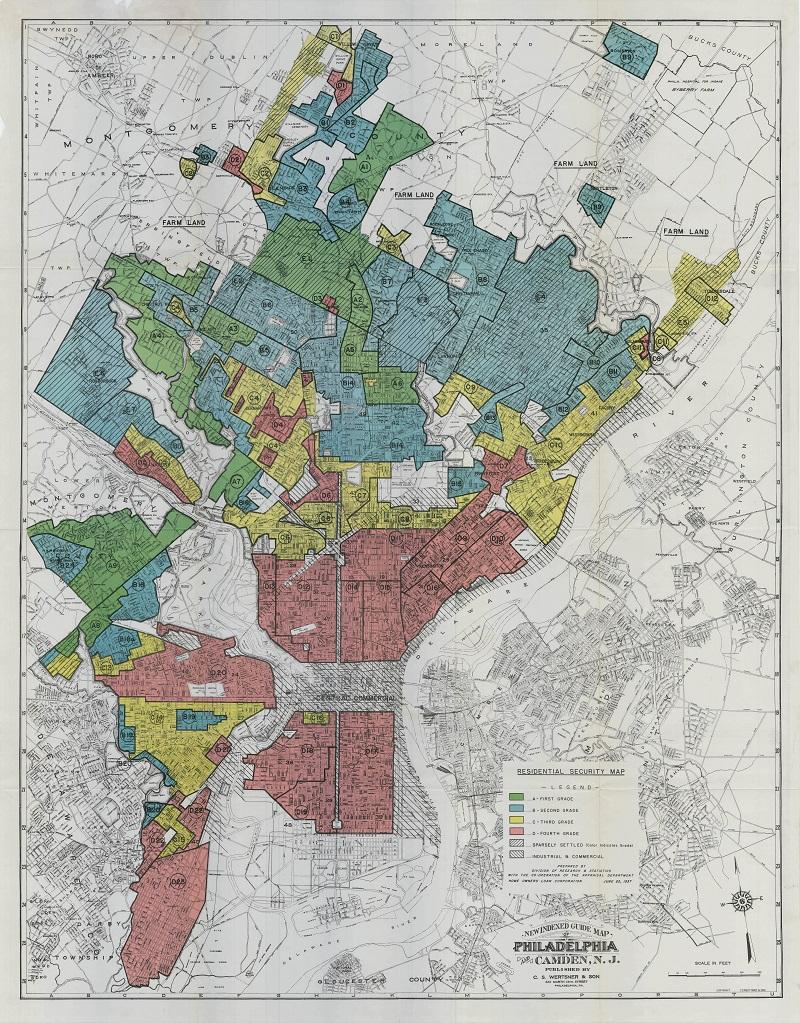 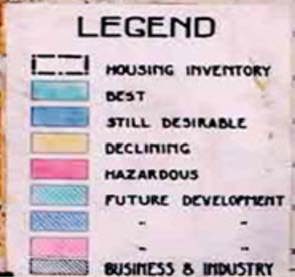 This map and the accompanying legend show the most and least favorable neighborhoods in a U.S. city, depending on the percentage of people of color. Red areas, the least desirable ones, indicate the largest populations of people of color, while green areas had primarily white residents and were deemed the“best” areas in which to invest.