Impact of Climate Change on Housing

Due to climate change, precipitation will likely decrease and higher temperatures will increase, elevating the chances of wildfires and their destructive consequences. A significant portion of San Mateo County is located in the wildland-urban-interface (WUI), which is defined as zones where fire-prone forests coincide with human habitation. More than 35 percent of terrain in the county has a high likelihood of fire ignition.29 As climate change is projected to exacerbate wildfire severity and frequency in the future, limited firefighting capabilities combined with housing construction in risky areas and high winds can lead to substantial housing damage, displacement of individuals and further financial instability to lower-income neighborhoods.

The continuous risk of wildfires has prompted insurance companies to assess certain areas in the Bay Area as too vulnerable to wildfires to be insured in the first place or to dramatically increase premiums in those areas. While California Insurance Commissioner Ricardo Lara ordered a mandatory one-year moratorium in September preventing homeowner insurance cancellations and nonrenewals in September.30 In the medium to longer term, the amount of land available to build on may be reduced, further hindering efforts to develop more housing in the county.

More information about the wildfire risk and possible prevention can be found here.

San Mateo County is more vulnerable to sea level rise than any other county in the state, as it has the most miles of coastline in California. This threat restricts where additional homes can be built and will make some existing homes on shorelines uninhabitable over time. Damage caused in low-lying areas and coastal communities due to sea level rise and storm surges will especially impact those who are financially vulnerable, who may not have the financial means to quickly relocate or repair damage. It is estimated that approximately 49,744 properties are currently at risk of flood damage in San Mateo County, and in the next 30 years that number will likely increase to 56,174. Flooding will cause hundreds of millions of dollars in damage and force thousands of residents to permanently move inland.31 Financing for repairing damage and adaptation will become an important aspect of the discussion regarding housing equity. 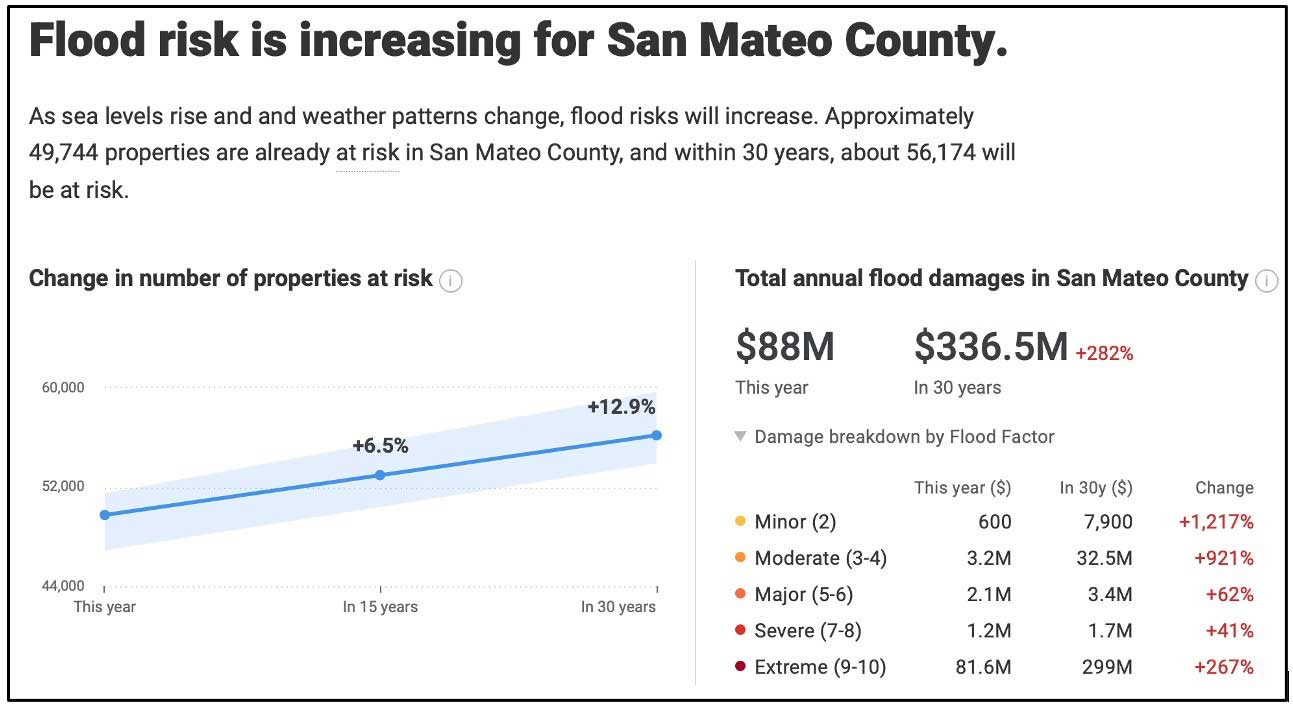 In addition, insurance rates will further burden housing costs in flood zones. New federal flood insurance rates will force Americans to pay rates that more closely reflect the real cost of their flood risk, reflecting the danger of sea level rise. This change, scheduled to begin October 1, 2021, is bound to negatively impact coastal real estate values and may persuade homeowners whose houses are at a high risk for floods to reconsider building in the same location. Federal law prohibits raising any homeowner’s flood insurance rate by more than 18 percent a year, though, so it could take 20 years before some homeowners are charged their full rate under the new system.32

An aspect of sustainability that is often overlooked when discussing equitable housing is environmental justice. One problem surrounding affordable and low-income housing is that it is predominantly located in locations across the county that have the worst environmental pollution. 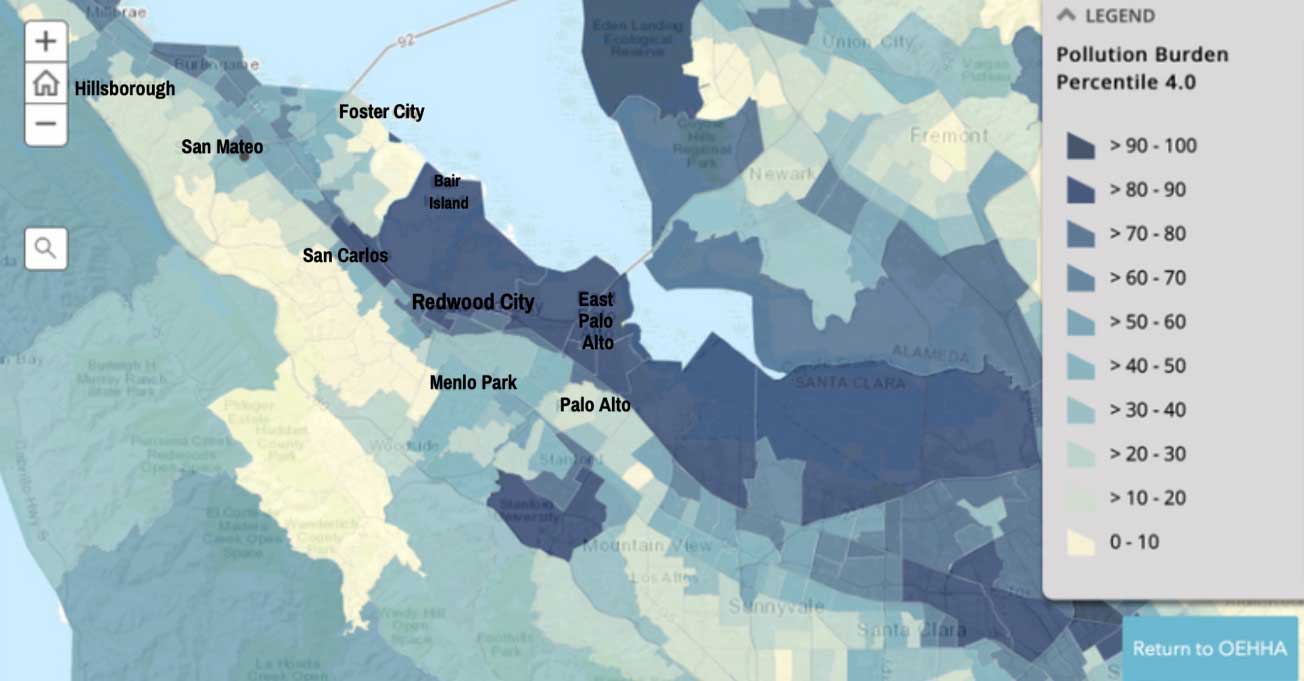 In addition to pollution, hazardous waste facilities are often located near low-income neighborhoods and people of color. Hazardous waste contains chemicals that can cause negative health and environmental effects. The map below shows a map of the locations of these facilities (marked in green squares), as well as the severity of hazardous waste exposure in the area relative to the state average. According to the CalEnviroScreen 4.0, the poorest neighborhoods in every city in the county are also the closest to a hazardous waste facility. Therefore, the well-being of low-income individuals goes further than the housing structure itself. More information about environmental differences in areas of San Mateo County can be found here.

32 Flood Insurance Costs Are Set to Skyrocket for Some, The New York Times 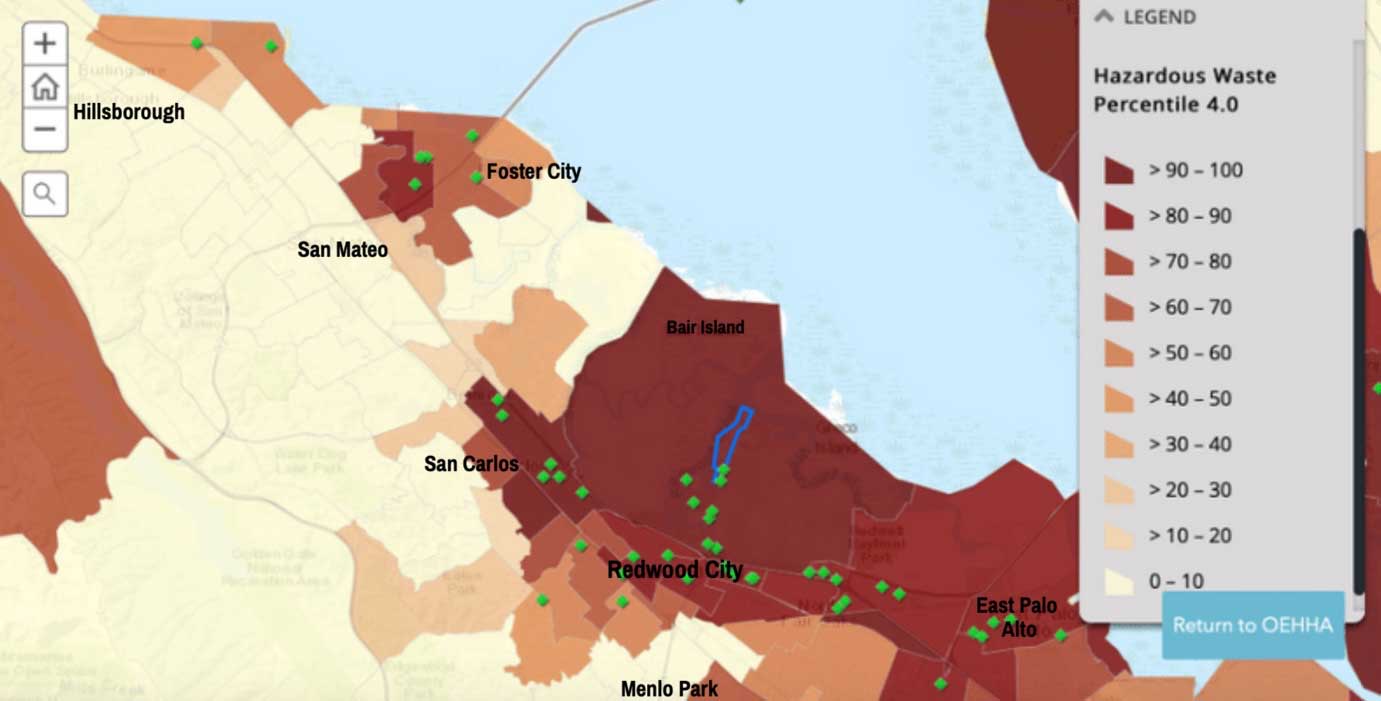