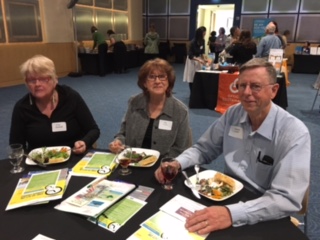 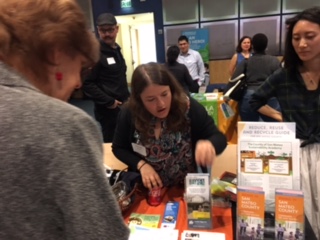 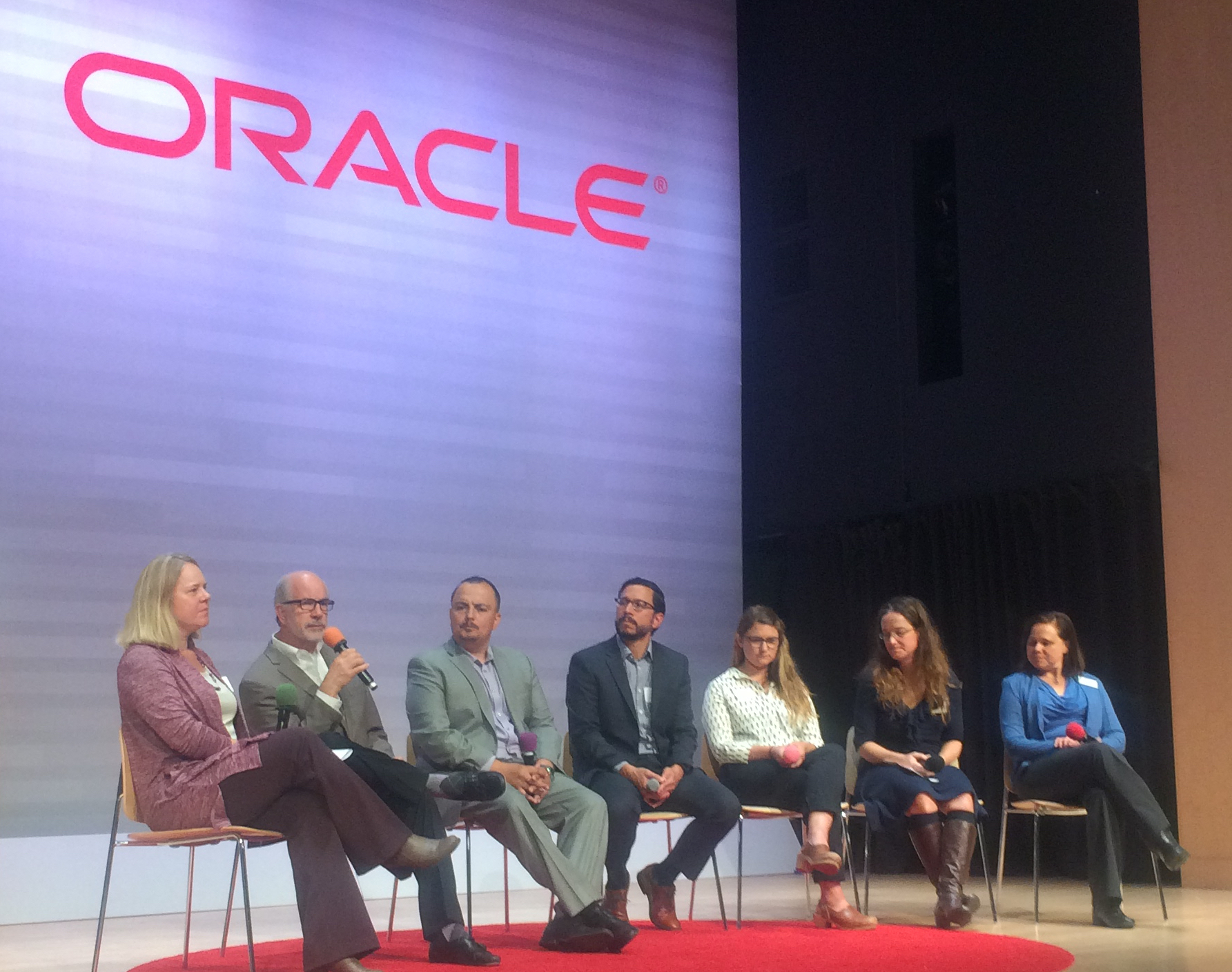 Six speakers offered ideas on reducing carbon emissions at a Sustainable San Mateo County (SSMC) luncheon on November 1 unveiling the 22nd annual Indicators Report, which focuses on climate change. Sponsored by and Peninsula Clean Energy, the event welcomed over 100 attendees and exhibitors, and was supported by a team of SSMC’s volunteers. The updated Indicators Report is available on SSMC’s website, featuring a special report on Climate Change Action.

Addressing the crowd at the Oracle Conference Center in Redwood City, Christine Kohl-Zaugg, SSMC’s executive director, said the recent Intergovernmental Panel on Climate Change (IPCC) United Nations report on climate change includes an urgent call for all nations to reduce carbon emissions by 45 percent in the coming decade in order to stay on the path of least impact, at 1.5C above pre-industrial levels. This will require unprecedented levels of cooperation and political will at all levels. Christine pointed to the incredible level of activity and drive to action that has been demonstrated locally as a very encouraging sign, moving us in the right direction.

Flora Kaplan, program manager for the Indicators Report, shared highlights of sustainability metrics for our County. Overall greenhouse gas emissions in San Mateo County decreased from 5.4 million metric tons to 5.2 million between 2013 and 2015. Although fewer commuters drove alone and more used Caltrain, transportation continued to contribute the most emissions – 60 percent – locally while energy was in second place, with 36 percent of CO2 released. The percentage of first-time homebuyers who can afford an entry-level home has decreased to 24 percent and the county is losing valuable community members who can’t afford to live here. The Indicators Report complies county level data on temperature and sea level rise from national sources, such as the National Oceanic and Atmospheric Administration (NOAA), which reported that 2017 was the third hottest year on record for the globe behind 2016 and 2015.

Kirsten Andrews-Schwind, communications manager for Peninsula Clean Energy, delivered the good news that the community choice energy provider’s electricity is now 85 percent carbon free and that residents enrolled in the program have saved an estimated $17 million in the past year. She invited audience members to take advantage of a “Go Electric” promotion through December 31 that will save them thousands of dollars on the purchase or lease of an electric vehicle. More information is available at peninsulacleanenergy.com/ev.

George Denise, former director of operations, Redwood Shores and director of sustainability, HQ region for the Oracle Corp., said operating efficiency, energy management and a focus on sustainability have resulted in annual electricity usage at Oracle’s 12 office buildings consistently declining over 10 years. Speaking about the shift regarding the role of the facility manager, George said “The role of the facility manager has changed dramatically from the just keep it functional day-to-day focus, to that of an individual who is competent, passionate, and a lover of facility management, and who embraces change as a necessary component of today’s business environment. Along with all his or her other roles, he or she must also be a futurist.” Francisco Ruiz, Oracle’s senior real estate and facilities technologies program manager, noted, “We can be far more efficient when everything is connected to one another.” He said, “It’s a cycle of continuous improvement that supports the triple bottom line of people, planet and profit.”

Chris Lepe, senior community planner for TransForm, explained how an integrated Mobility Action Plan offering alternative commuting options, such as express buses, carpooling and last-mile connections, can move more people in fewer vehicles. He said turning one of Highway 101’s four lanes into a high-occupancy toll (HOT) lane would move 8000 people per hour in that lane instead of 2,000. One startling statistic he gave was from a study of San Jose parking lots, which found that paved lots throughout the city equal an area the size of Belmont and San Carlos. “We have literally paved over paradise to accommodate parking,” Lepe said. Referring to the housing-jobs imbalance in San Mateo County, he noted that 19 jobs have been created for every housing unit built in the last five years, as reported by the Housing Leadership Council .

Adria Arko and Sara Polgar of the San Mateo Resource Conservation District described how they engage with local landowners in rural San Mateo County to help them manage soil, water and wildlife to increase resilience to climate impacts, while mitigating greenhouse gas emissions. “Carbon farming” utilizes agricultural and conservation practices to reduce emissions and sequester carbon in soils and vegetation. Applying a thin, quarter-inch layer of compost on rangelands sequesters approximately 1.5 tons of carbon per acre per year. Restoration of grasslands with native, deep-rooting perennials also increases soil carbon and benefits ranchers by establishing better forage for grazing and reducing erosion. So far, the Resource Conservation District has developed carbon farm plans with 5 farms and ranches and identified opportunities to offset 1,059 tons of CO2 equivalents every year. In concluding Arko noted, “We’re often told that agriculture is part of the problem, but we’re proving that it’s part of the solution.”

SSMC is grateful to Oracle and Peninsula Clean Energy for sponsoring this event.