Water and energy use are interrelated. Energy is needed to extract, clean, pressurize, and transport water, as well as heat or cool it for commercial and residential use. Water or steam is used to propel turbines that produce hydropower and thermoelectric power. It is also a vital element of nuclear power production and natural gas extraction. In contrast, renewable energy sources tend to consume less water. Population growth, stress on water systems from climate change, and improvements in water quality regulations increase the demand for water resources and the cost of energy. Conservation and integrated planning is needed to effectively manage these resources. Given the relationship between water and energy use, conservation of one resource will in turn conserve the other.

Water and energy conservation efforts will result in a smaller carbon footprint for the water energy nexus. The power production process is increasingly efficient through improved technology and heavier reliance on low impact sources such as solar or wind. Power production methods that harm water sources and pose a threat to wild life and human health will be eliminated. Water is recycled rather than disposed. California’s farmers will use efficient irrigation practices such as leveling of fields, surge flooding, capturing and reusing of runoff, evaporation control and recapture, drip and spray irrigation.

The graphic below illustrates how energy is expended in the delivery, use, reuse, and disposal of water in our daily lives. The end use phase of this process expends the most energy, are residential and commercial consumers heat, pressurize, or cool water. The kilowatt and gigawatt estimates in this chart only apply to electricity, which accounts for 20% of the electricity used by the state; whereas, 99% of the natural gas used in California is applied to the end use cycle. The state uses 20% of its electricity and 30% of non-power plant related natural gas to heat and consume water, higher than the national average of 13% of electricity for water related activities. According to the US Energy Information Administration (2014), the average residential consumer uses 10,932 kWh of electricity each year.

Ninety-one percent of San Mateo County’s water comes from the Hetch Hetchy Reservoir in Yosemite National Park, over seven percent comes from surface and groundwater, and the remaining water supply is recycled water. The county’s energy intensity for water use is below the California average for two reasons: (1) the water supply is gravity fed, reducing the need for pumping and conveyance, and (2) water from Hetch Hetchy is pristine and requires less treatment. San Mateo County’s main water category for water withdrawal was public supply at 83.4 million gallons per day. 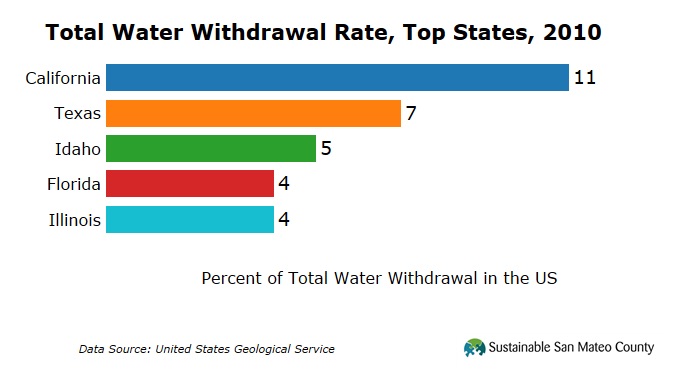 Water is a vital input for energy production. Nationally, more water is used for power production than for crop irrigation; however, this is not the case for California. The biggest water users are bioenergy derived from dedicated energy crops, hydroelectric facilities, and thermoelectric facilities that use once-through cooling processes. Waste-based bioenergy, thermoelectric facilities using dry cooling, solar photovoltaics, and wind turbines require the least water. Though solar and wind systems use little water to produce energy, they do require some water for the construction and maintenance.

See the Climate and Energy page for more information on California’s energy use.

The majority of California’s energy comes from hydroelectric and thermoelectric power plants. These methods tend to have high water withdrawal and evaporation rates. Thermoelectric power generation systems use steam to propel turbines and water to cool them. In 2010, thermoelectric power plants withdrew 6,601 million gallons of water per day. Water that isn’t consumed or contaminated by the production process is released back to water sources, often at a higher temperature. Depending on the location of the power plant, water sources include fresh and saline water from both surface water and groundwater. However, 95% of California’s water withdrawal for energy production is saline water. 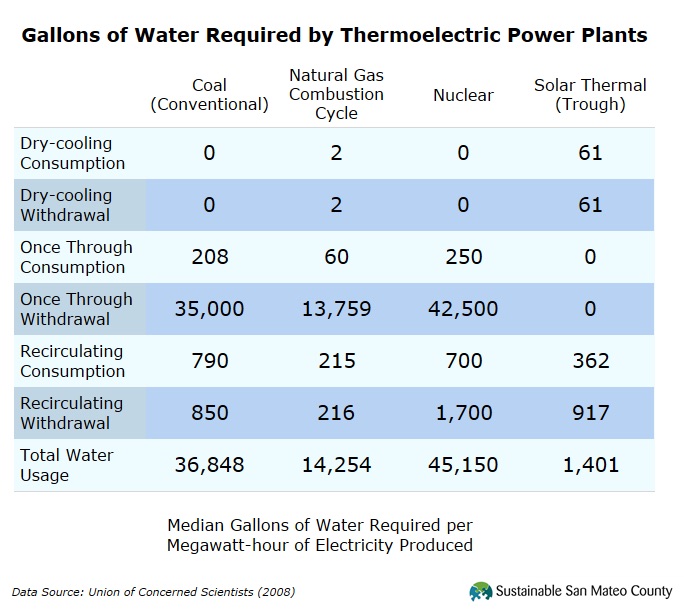 Hydroelectricity uses the flow of water from a higher elevation to create kinetic energy to power turbines, which then generate electricity. Hydroelectricity is an inexpensive renewable energy source and produces a minimal amount of greenhouse gases; however, production is solely dependent on river flows and reservoir operation. Wet years with higher runoff bring more hydroelectricity generation, whereas drier seasons bring in less production. 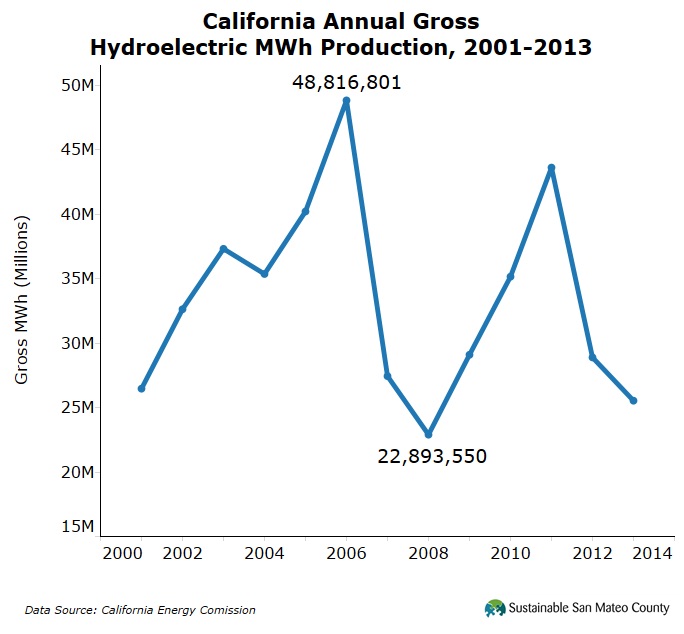 Various types of wastewater may be transformed into biogas, a renewable form of energy. The process begins when used water containing biodegradable material is collected and digested by microorganism in an airtight container. The result is methane or carbon dioxide, which is then cleaned and compressed. These biogases may be converted to electricity, heat, or transportation fuels that will emit less green house gases upon combustion compared to non-renewable gases.

Anaerobic digestion may also be applied to solid waste, such as food scraps and animal manure. Learn more on the biogas energy page of the NRDC website.

Locally, Devil’s Canyon Brewery in San Carlos uses an on-site digestion system to turn used brewing stock to methane. The brewery was one of SSMC’s Sustainability Award Winners for 2014.

In December 2015, the City of San Mateo broke ground on a biogas conversion project at its wastewater treatment plant. San Mateo is the first city in California to convert methane to compressed natural gas. Once the new digester is operational in August 2016, methane gas that was previously burned off by flare will become an energy source. The project is funded in part by a $2.45 million grant from the California Energy Commission and will produce the equivalent of 500 gallons of gasoline a day. The natural gas will power a new fleet of city vehicles, significantly reducing reliance on gasoline. The City plans to invest in more natural gas powered vehicles to decrease its greenhouse gas emissions.
(jump to top of page)