The path of El Camino Real (Spanish for “the Royal Road”) was blazed by Padre Junipero Serra, a Spanish Franciscan friar who founded a mission in Baja California as well as the first nine of 21 Spanish missions between San Diego and San Francisco. The route of El Camino Real changed due to weather, travel modes, and the tides. Although a well-traveled road today, El Camino Real began as an obscure footpath that linked Spanish settlements to administrative centers. The current path of El Camino Real, including the 43-mile stretch between Daly City and downtown San Jose (State Route 82), is decidedly fixed and developed. 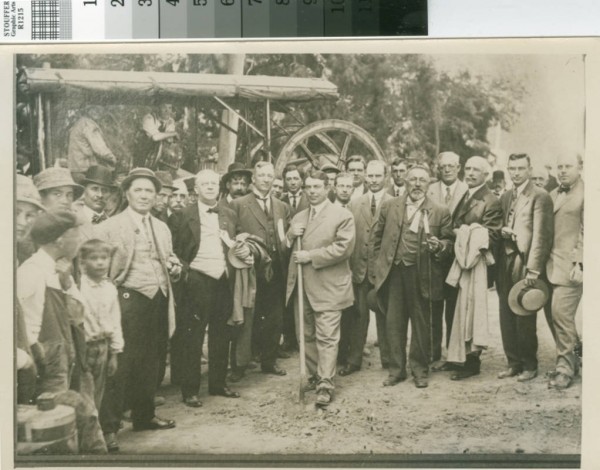 Groundbreaking on El Camino Real in San Bruno in 1912.

The preservation of El Camino Real was spearheaded by Miss Anna Pitcher, Director of the Pasadena Art Exhibition Association to the Women’s Club of Los Angeles, in 1892. This notion was driven by two factors. The first factor was the rise of the automobile, which created a small group of wealthy Californians who desired a maintained state highway. The second factor was the romantic view of the state’s Spanish colonial history, which was connected by El Camino Real, to appeal to tourists. Finally, the El Camino Real Association was formed 1904 to indicate the historical route, advocate for tourism along the road, and seek support from the government.

As a way to indicate the historical route of El Camino Real, cast iron bells were hung from eleven-foot bent guideposts alongside the road. Since 1906, the Mission Bell Marker System has run the full span of El Camino Real. The bells were installed as landmarks for travelers as well as references to the Francisco padres who settled California. 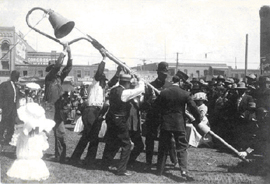 Over 450 markers were in place by 1913, but many bells were removed over the years due to damage, vandalism, and theft. As part of a restoration project mandated by legislation, the Division of Highways was required to maintain the marker system.

El Camino Real is California Registered Historical Landmark No. 784, as commemorated on a plaque at Mission Delores in San Francisco. The plaque marks the northern terminus of El Camino Real as Padre Junipero Serra knew it. El Camino Real was eventually extended north to Sonoma. The portion of El Camino Real in San Bruno was the first State Highway to be paved in California. The groundbreaking ceremony was held on August 7, 1912.

Today, despite passing through the heart of so many Peninsula communities, El Camino Real is an urban arterial that functions largely as a bland, featureless traffic funnel with limited interface with the existing communities. We are changing that. 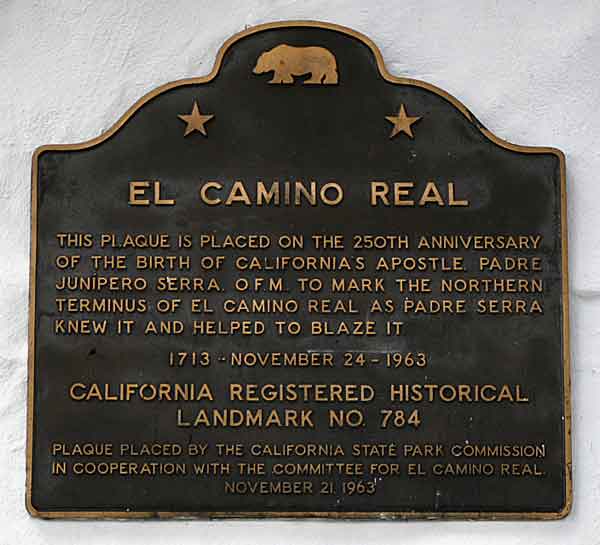 The Grand Boulevard Initiative is helping make more of what our communities desire and need: vibrant and sustainable neighborhoods, thriving business communities, and a strong system of public transportation that is safe and accessible. The Initiative supports work to make the El Camino Real Corridor more friendly to the people who live and work here: Parents. Kids. Commuters. Homeowners. Local businesses. 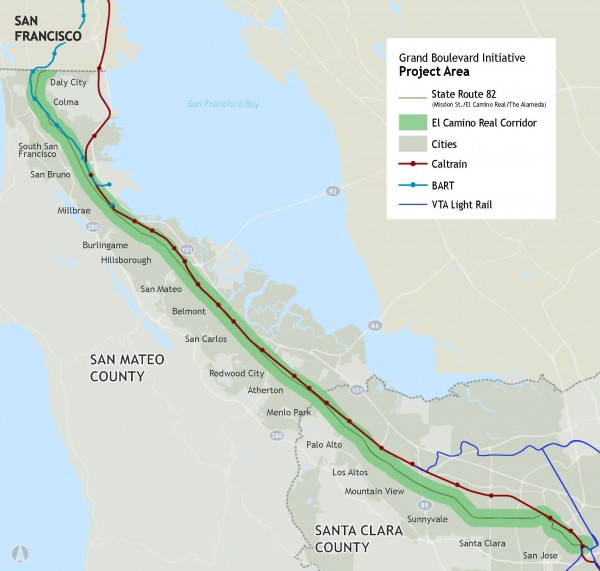 The Grand Boulevard Initiative is a successful example of local agencies collaborating to meet regional challenges and implement smart growth practices. Nineteen cities, two counties, two transit agencies, regional agencies, the California Department of Transportation, and community organizations have joined together to influence regional solutions based upon local values. This is a significant community and regional effort that links transportation, land use, and economic development planning to address the anticipated regional growth and create sustainable communities. As the Grand Boulevard Initiative involves all jurisdictions having purview over the 43-mile El Camino Real Corridor, it plays a vital role in creating people friendly places and fostering sustainable communities that best serve the existing and future populations that live and work in the heart of the San Francisco Bay Area.