A sufficient supply of housing is available to all members of society, and new housing supports diverse communities and healthy environments. Local governments consider the housing needs of people of all income levels when planning for new development. Zoning regulations allow for higher density housing located in downtown areas and along transit corridors to meet the needs of our growing population, build community, support transit ridership, and help reduce greenhouse gas emissions.

After declining for several years, housing prices and rents in the county are on the rise and San Mateo County has some of the highest housing costs in the nation. Increased property values may be welcome news for many current homeowners, but for first-time buyers or people relocating to the area, it only exacerbates the difficulty of purchasing a home in the county. 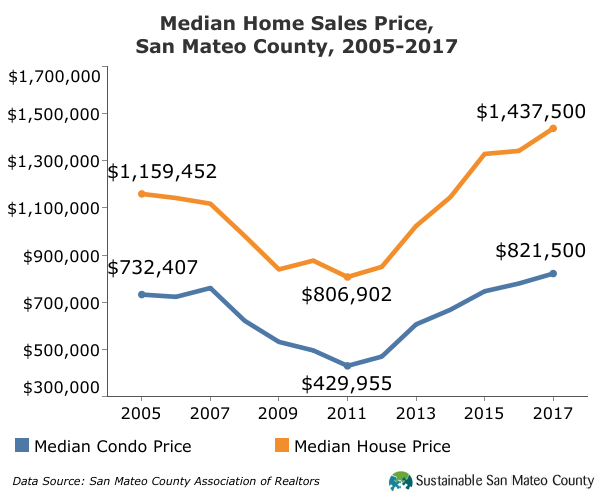 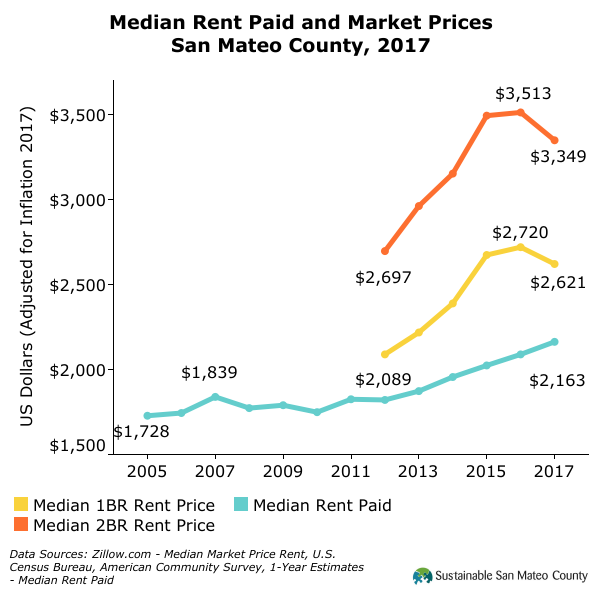 The National Low Income Housing Coalition’s 2017 Report “Out of Reach” documents the shortage of affordable housing throughout the United States. Over half of all renters in the country are cost-burdened, meaning they pay more than 30% of their income on housing.

According to the Report, in order to afford a 2-bedroom unit at fair market rate in San Mateo County, a renter would need to earn an hourly wage of $58.04 (equivalent to annual income of $120,720 or 5.5 full-time jobs at minimum wage). San Mateo County is tied with San Francisco and Marin Counties with the highest rental costs in the U.S.

A lack of affordable housing limits the ability of people to live in the county and can reduce the availability of qualified workers for local jobs, thereby constraining economic growth. In response to high housing prices, many workers are forced to either live outside the county and face long commutes or stretch themselves financially and pay more than they really can afford for housing. Approximately 60% of those employed in San Mateo County commute in from other counties for work, which leads to increased traffic congestion and vehicle-related emissions. 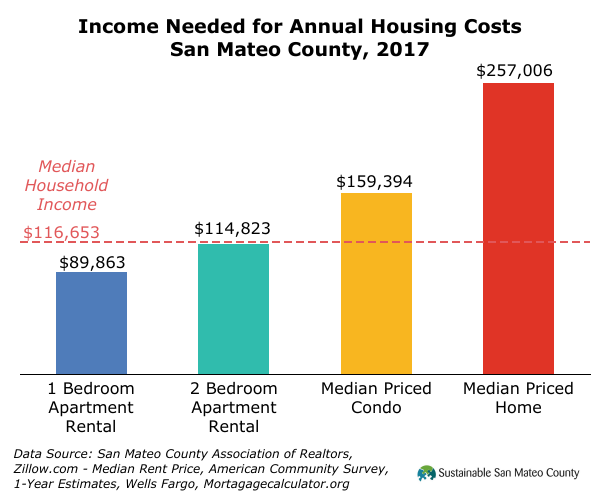 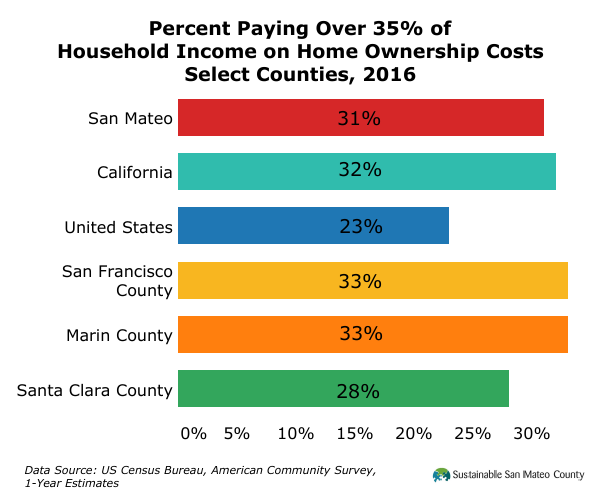 Jobs-Housing Fit is the ratio of the low-wage jobs and affordable housing units in a region. The Nonprofit Housing Association published ratios for selected cities in the Bay Area. Data indicates that in the City of San Mateo, there are over 8 low-income jobs for each unit of affordable housing, and 3,556 affordable units are needed to reach a jobs housing fit of 2 jobs per unit which is still above the average jobs/housing ratio of 1.58 jobs per unit. 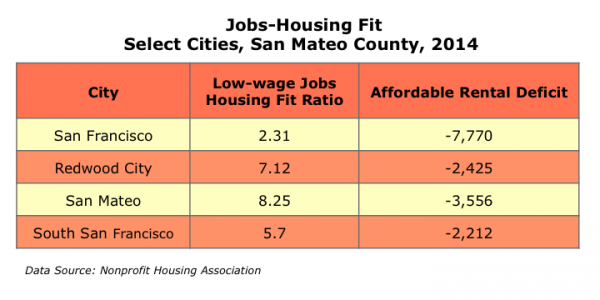 According to the map below, prepared using the Regional Opportunity Index mapping project, most neighborhoods in San Mateo County have a jobs housing fit ratio of 4 or higher. 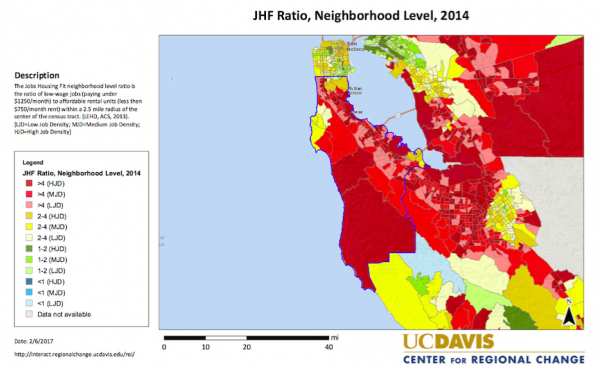 In response to California’s housing crisis, a series of bills have been passed to tackle the various issues pertaining to housing. For example, SB3 – Veterans and Affordable Housing Bond Act of 2018 ensures that federal funding will be used to help veterans and, low and middle-income families obtain affordable housing. Other bills – like SB35 – hold cities accountable for the amount of housing they approve. In addition, SB2 was created in order to generate funding for affordable housing programs through fees on real-estate documents. Despite the push from elected officials, many organizations and special interest groups have expressed disapproval toward certain housing bills. For example, SB 827, a controversial housing bill that was introduced by Scott Wiener (D-San Francisco), proposed building taller and denser housing near transit stations. However, activists voiced concern that low-income families would be pushed out of their neighborhoods and their homes replaced with more expensive housing. 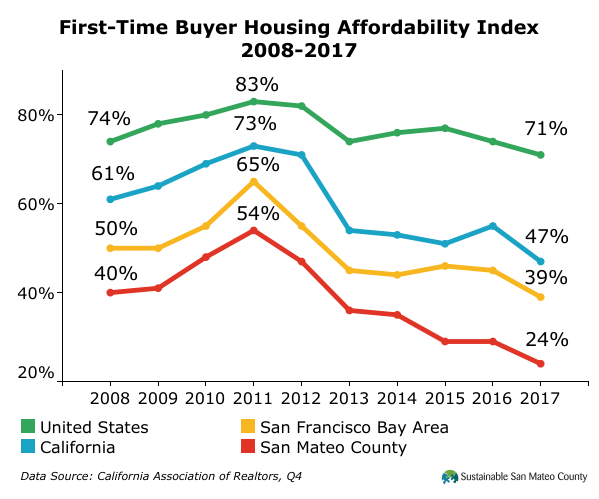 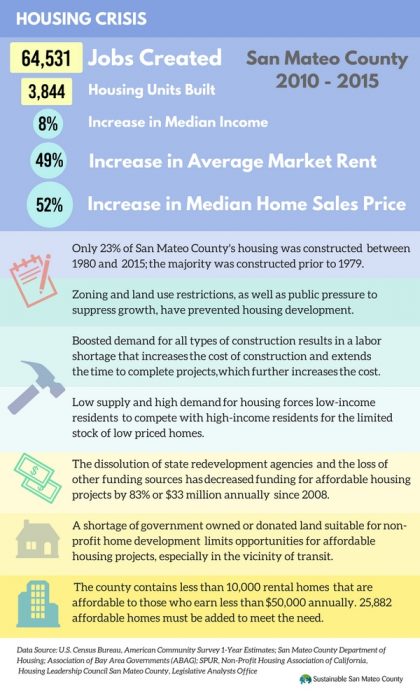 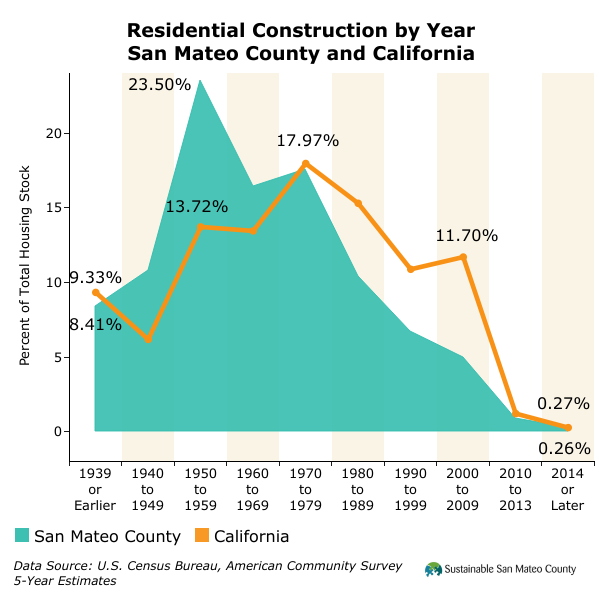 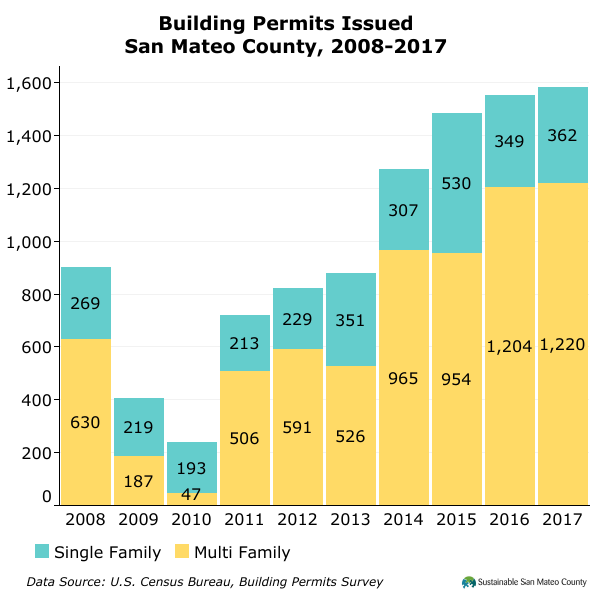 The county’s housing supply shortage is a primary driver of high housing costs. The Regional Housing Need Allocation (RHNA) is part of a state-mandated process that creates housing production targets for each county based on existing need and forecasted population and job growth. The goals are to increase the supply of housing and to ensure that local governments consider the housing needs of people of all income levels. Housing production targets are divided into income groups and calculated as a percent of the area median income (AMI). The 2014-2022 RHNA target for San Mateo County is 16,418 new housing units, with 43% of them required to be affordable housing (for very-low and low income residents). 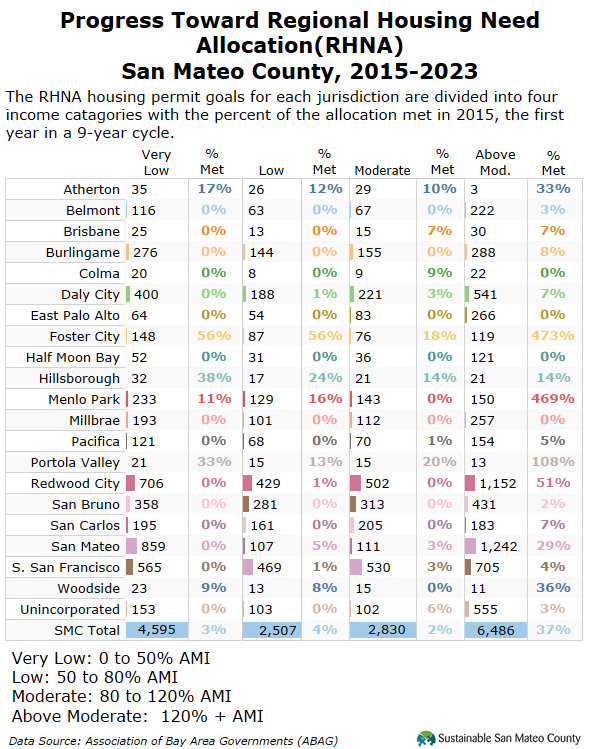 As of January 2015, all twenty-one San Mateo County jurisdictions were required by the state to update the Housing Element of their General Plan. The Housing Element is a vital tool cities use to plan for housing to accommodate our growing and changing population. It outlines strategies and locations where cities have the best opportunity to meet housing goals, while ensuring that new development enhances the qualities that make our communities livable and unique. To aid in this effort, the San Mateo County Housing Element Update Kit, otherwise known as “21 Elements”, is a collaborative project that aims to encourage and assist with the production and certification of high quality Housing Elements in the county. More broadly, this collaboration intends to strengthen local partnerships and develop solutions to housing needs throughout the county. For more information, visit www.21elements.com.

Public participation is an integral part of the Housing Element update process. Municipalities have held, and will continue to hold, meetings to provide the public with opportunities to help shape their communities. 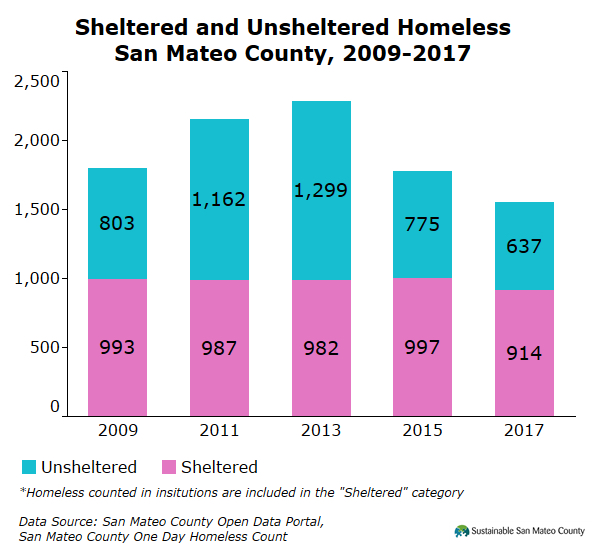 Federal deinstitutionalization of mental health services in the 1960s was intended to enable patients to receive treatment in their own communities rather than far-off institutions. However, due to cuts in federal funding, some residents that need mental health support in California end up homeless, often self-medicating with illegal drugs rather than prescribed pharmaceuticals. The Mental Health Association of San Mateo County provides a solution to this problem by constructing studio apartment complexes with mental health support on-site. The organization is currently constructing a 16-unit facility in the North Fair Oakes area of Redwood City in collaboration with federal, state and local governments, foundations, and private funders. The apartments are designed to enable residents to live independently while receiving mental health services and being part of a community. To qualify, residents must have a low income, a history of homelessness, and documented mental health disability.