All children receive a high quality education that equips them with the tools and knowledge needed to pursue their dreams and participate productively in society. Students are reading proficiently in third grade, and high school and college graduation rates are high. School funding is equitable among districts serving all economic strata, and college is accessible and affordable for all.

A good education provides children with the foundation they need to think critically and to take effective action to reach their goals and fulfill their potential. A strong education also passes on the democratic values of our society and encourages students to become productive members of their communities. 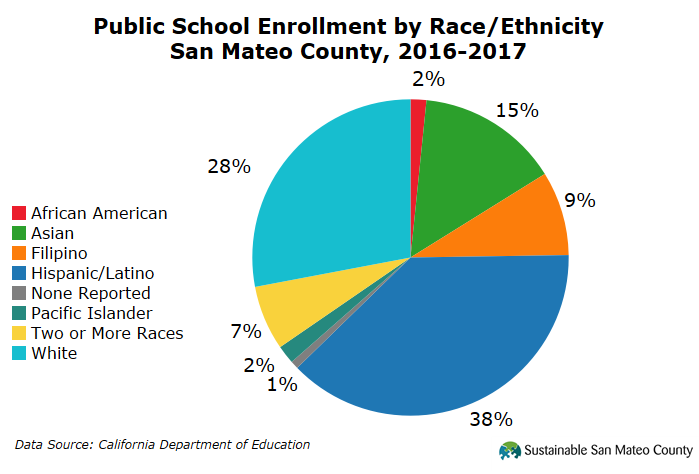 Many cities and school districts have implemented developer fees and taxes to fund services and facilities for the growing number of students. The residents of Menlo Park passed a parcel tax in 2017 to provide funding to maintain class size and preserve educational programs. A school impact fee on new residential developments provides funding for the Redwood City School District and Sequoia Union School District. Half Moon Bay’s Impact-Developer fee applies to both residential and commercial development and funds construction and reconstruction of school facilities. San Mateo Union High School collects fees on construction in the City of San Mateo, Foster City, Hillsborough, Millbrae, San Bruno, and unincorporated Burlingame. The City of Millbrae instituted development fees for all building permits for new construction or additions over 500 sq. ft., to provide additional funding to the Elementary and High School Districts.

Public school funding in the state is based on a complex series of formulas that has led to vast disparities in per pupil expenditures by districts. In 2014, the state established a new Local Control Funding Formula to improve the funding balance (learn more below).

After several years of budget cuts for California public schools, a 2012 statewide tax initiative and an increase in capital gains tax have helped to restore funding levels. However, as of 2013 California’s average funding per student was below the national average. 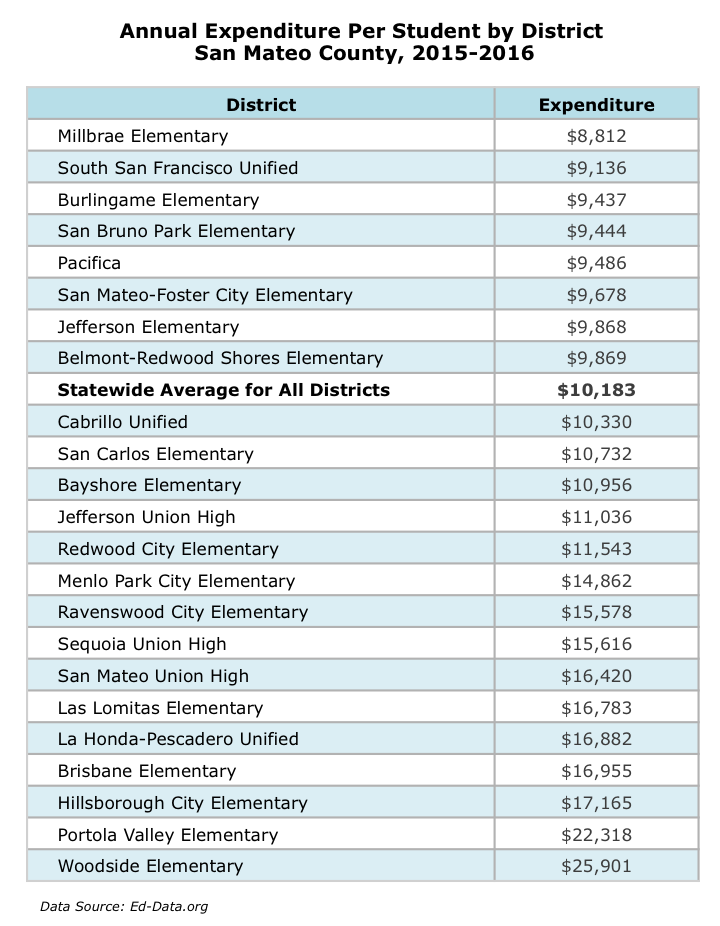 In January 2014, the California Board of Education approved the Local Control Funding Formula proposed by Governor Brown and approved by the state legislature in 2013. The goal of the new plan is to make allocations more equitable and to channel additional funds to low-income students, foster children, and English learners. Under the plan, all districts receive base funding. Districts where disadvantaged students make up more than 40% of the enrollment will receive additional funding. “Concentration Grants” provide supplemental funding to districts comprised of over 55% underserved students.

A 2008 report by the University of California, Berkeley Law School found that the two most significant factors determining children’s academic success were family income and English language ability. On standardized tests, the achievement gap between affluent and low-income students has risen 40% since the 1960s, with children on the bottom end of the income scale now lagging four years of school behind their peers at the upper end. Addressing the negative effects of growing income inequality and the needs of a large English Learners (EL) population is crucial for improving the long-term education outcomes for these students. 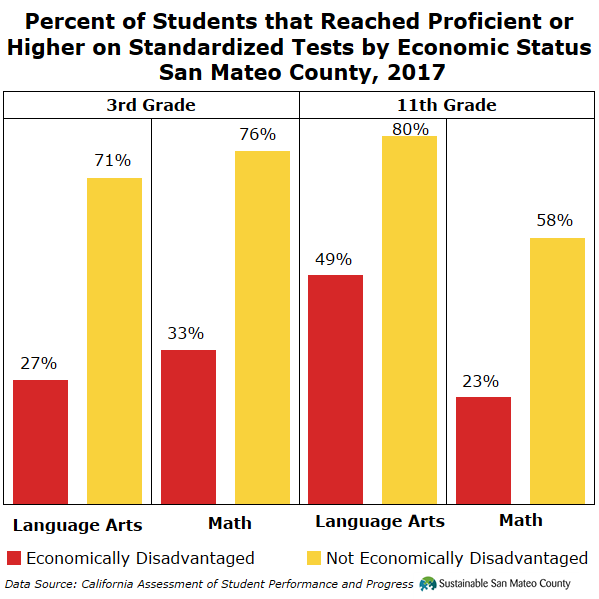 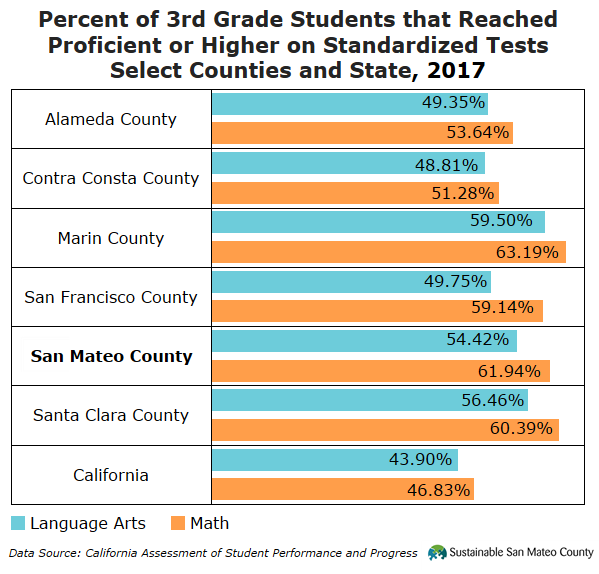 In San Mateo County, nearly one quarter of public school students are classified as English learners (EL), and across the state, EL students score much lower on California Standards Tests than other groups. 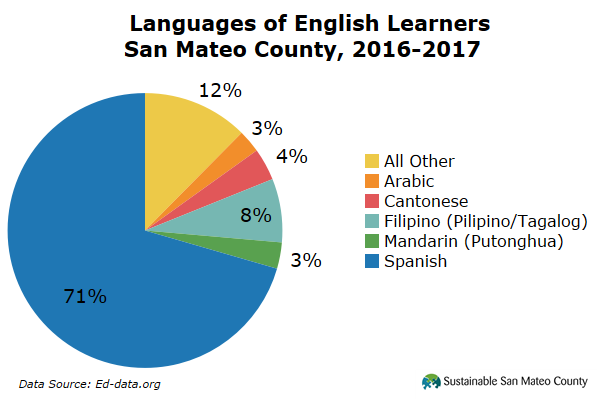 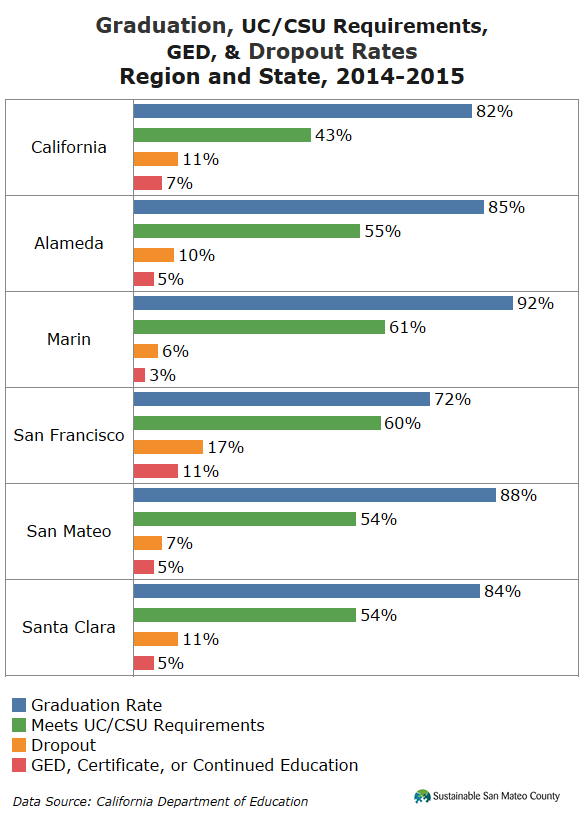 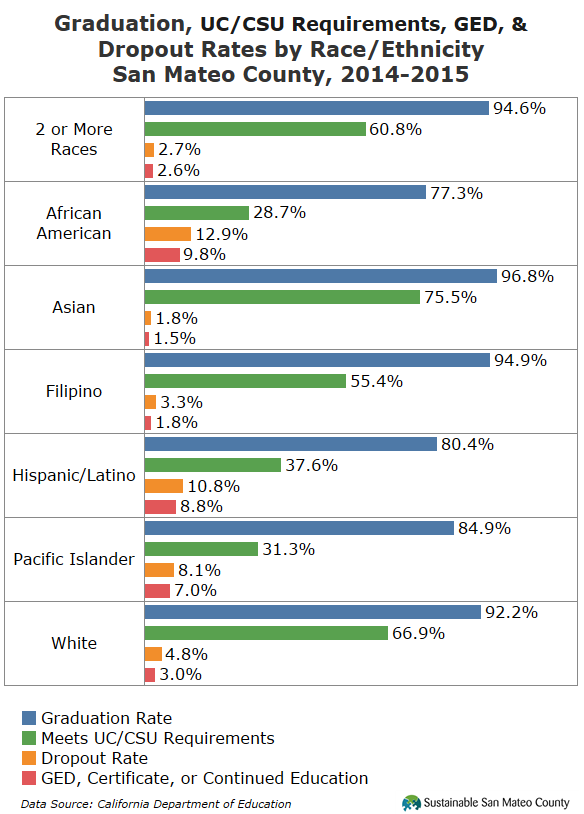 Although the rewards of obtaining a college degree are growing, so is the price tag for achieving one. According to a report by the PEW Charitable Trusts, in the early 1990s, less than half of U.S. college students graduated with outstanding student loan debt, now close to two-thirds graduate with debt. While more students are in debt, the amount owed is also growing. In 2010, the average outstanding college loan debt was $26,682, an increase of 52% from 2001 (adjusted for inflation, $2011). Rising tuition costs and student loan debt are increasingly making a college degree unaffordable, especially for students from low-income families.