Greenhouse gas (GHG) emissions are reduced to a level that is in balance with nature’s ability to absorb them. Mileage standards for automobiles continue to rise, and multi-modal transportation options reduce total vehicle miles of travel. Energy is produced from renewable and greenhouse gas-neutral sources and is used efficiently. New buildings are constructed to the highest green standards, and older buildings are retrofitted to ensure efficient energy use. While working to mitigate GHG emissions, communities simultaneously implement adaptation measures, such as building levees or restricting development in floodplain areas. 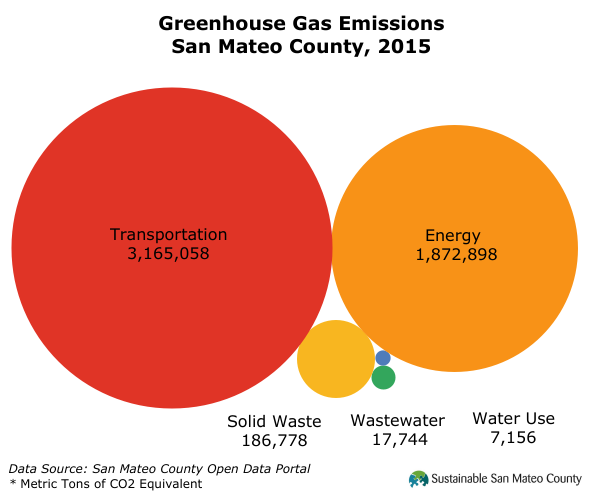 Local governments have a key role in helping the state meet its greenhouse gas (GHG) emissions reductions targets. In San Mateo County, all municipalities have now adopted a Climate Action Plan (CAP). This process began with a baseline inventory of municipal and community GHG emissions used to identify target reductions. Emissions reductions strategies unique to the community were evaluated, and after extensive public meetings and an environmental review process, the most promising strategies were put into the CAP and/or General Plan.

To support the development of Climate Action Plans for the 21 municipalities in San Mateo County, the county government created the Regionally Integrated Climate Action Planning Suite (RICAPS). As shown in the cumulative county level measurement above, the five major emissions categories include energy, transportation, waste,water, and wastewater. The county maintains a RICAPS website that features Progress Reports for each municipality with detailed charts that reflect the achievements of their Climate Action Plans.

By 2012, the county produced a visionary Government Operations Climate Action Plan, which details successes toward this goal already underway in San Mateo County and beyond. Shortly after the completion of this plan, the County released its Community Climate Action Plan, also referred to as the Energy Efficiency Climate Action Plan. This plan focuses on emissions produced in the unincorporated areas of the county and lists proposed emission reduction efforts. Updated information can be accessed on the San Mateo County Open Data Portal, in the Performance Section.

In 2014, the County Manager’s office formed the Office of Sustainability to encompass the various programs addressing GHG emission reductions and environmental stewardship. Its notable achievements include the formation of a community choice energy provider, Peninsula Clean Energy, and the development of new initiatives on transportation and housing, including the impressive web resource, Home For All. 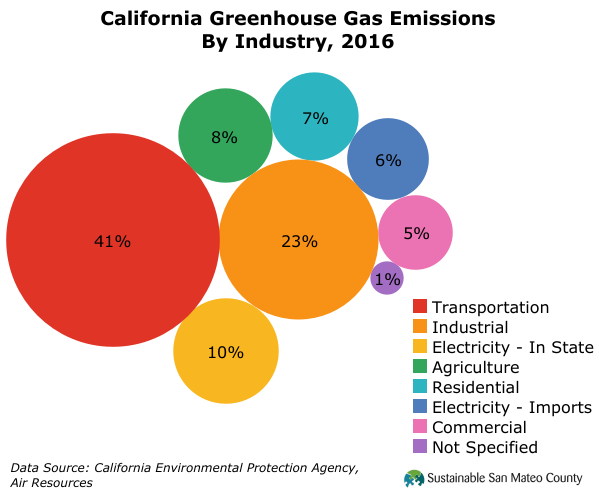 Measurements at the municipal level are just one way to understand the emissions we produce in our daily lives; another method is based on the products and services we consume. The Bay Area Air Quality Management District and the Cool Climate Network at UC Berkeley developed a Consumption-Based GHG Emissions Inventory that accounts for emissions throughout the entire life cycle of products and services, which spans production, shipping, use, and disposal. Measuring emissions in this way shows how local activity impacts emissions elsewhere. Comparing consumption patterns on the county and municipal level reveals the relationship between income or wealth and emissions, as well as the impact of transportation on personal GHG emissions.

Global weather measurements by the National Oceanic and Atmospheric Administration indicate that 2016 was the hottest year on record, while 2015 was the second hottest year. Although the global temperature fell in 2017, the average temperature continues to trend upward. This gradual warming was recorded in several locations in San Mateo County. Earth’s average temperature has increased 1.4 º Fahrenheit over the last century and is projected to rise another 2-11 º over the next 100 years if we do not curb emissions and continue to operate under a “business as usual” scenario. 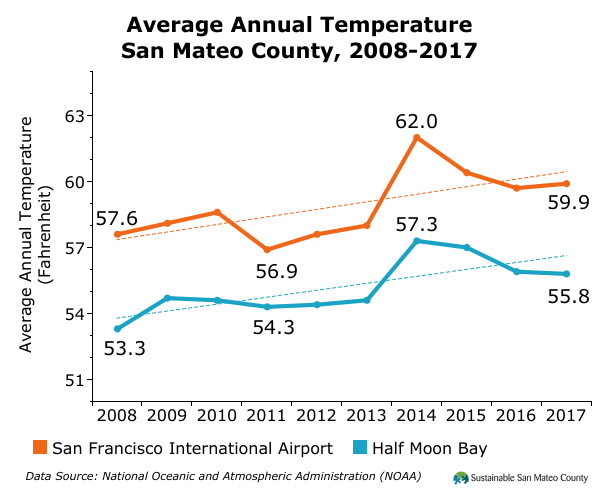 The increase in average temperature is a measurable indication of climate change with serious impacts. According to the National Climate Assessment released in May 2014, the following changes are already taking place in California and the southwestern United States:

Other potential impacts include:

Climate is a major factor in agricultural crop production. Plant growth is determined by atmospheric temperature, humidity, moisture, and nutrients (carbon, nitrogen, etc.). Crops are selected for compatibility with the local climate, and fluctuations may require a shift in production if temperatures change. Shown below are examples of how climate affects agriculture, drought, and other resources.

The impacts of climate change”including altered rainfall patterns, rising sea levels, and more extreme weather events”can already be observed, and Bay lands and coastal areas in San Mateo County are vulnerable to these threats. According to the San Mateo County Sea Level Rise Vulnerability Assessment, a sea level rise of 3.3 feet and a 1% annual chance storm pose a threat to 7,000 acres of wetlands, $40 billion in assessed property value, 380 miles of roads, 7 of 9 wastewater treatment plants, and well over 100,000 people. 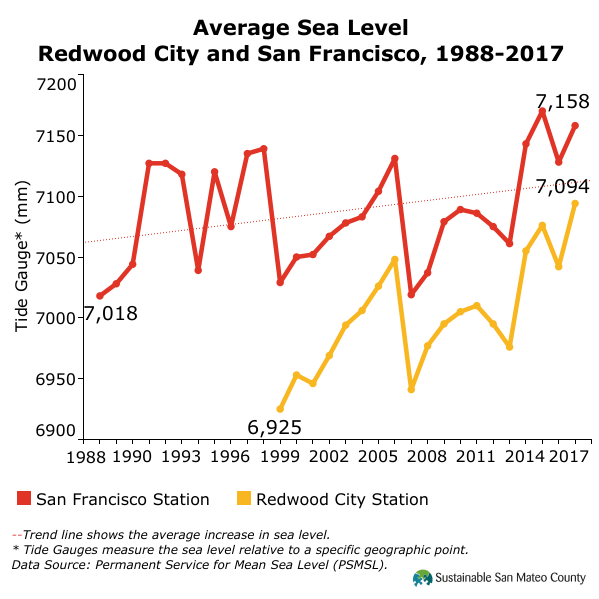 Sea level rise is the result of thermal expansion (water temperature increase) and the increased melting of vast bodies of ice. These phenomena, as well as high intensity storms, are a result of climate change.

The combination of sea level rise, elevated high tide, and stronger storms pose a major threat of flooding in low-lying areas on the bay side of the county and erosion along the coast. The National Oceanic and Atmospheric Administration (NOAA) reports that the sea level remained stagnant until the 20th century. However, since 1900, the sea level has risen 0.04 to 0.1 inches per year, a cumulative eight inches in the Bay Area as of 2015. Projections indicate a 55-inch sea level rise in San Mateo County by 2100. An estimated 10% of San Mateo County’s population will be directly affected by a sea level rise of 36 inches.

According to the San Francisco Bay Area Planning and Urban Research Association (SPUR), 40% of the state’s land drains its water into the San Francisco Bay. The Bay Institute reports that flooding from storm surges is the greatest threat to developed areas along the bay’s shoreline. Intense wind and waves from a 1% annual chance storm* and sea level rise will result in erosion of the county’s coastal bluffs and beaches and saltwater intrusion in watersheds.

The San Mateo County Sea Level Rise Vulnerability Assessment identified and evaluated risks to vital infrastructure such as roads, airports, hospitals, and wastewater facilities. The county’s airports and major transit corridors (Highway 101 and El Camino Real) are located close to the shoreline and face risk of flooding. These assets are essential to the economic and physical well-being of residents. Wastewater treatment plants at risk to sea level rise flooding pose serious public health and environmental threats to the county. Sewage backup and overflow can release harmful bacteria into surrounding waterways,contaminating drinking water and increasing the risk of disease.

San Mateo County is home to diverse communities. Some populations are more vulnerable to sea level rise flooding than others due to geographic location, socioeconomic status, physical abilities, age, access to transportation, and language barriers. These factors increase risk exposure, the ability to plan for and respond to flooding, and the stresses of post-flooding situations.

Protecting the County from sea level rise, flooding and coastal erosion is an enormous challenge that will require collaboration across jurisdictional lines and securing considerable funding from Federal, state and local sources. To better position the county and it cities to tackle this challenge, a group of city and county staff and elected officials have been working over the last six months to develop a proposal to form a countywide Flood and Sea Level Rise Resiliency Agency. The plan is to present the proposal for this new agency to the Board of Supervisors and the City/County Association of Governments (C/CAG) Board in January 2019. Stay tuned for more information on this important initiative.

Anticipating sea level rise impacts along the coast and the Bay, the San Mateo County Office of Sustainability published the county’s first Sea Level Rise (SLR) Vulnerability Assessment in 2018. Combining SLR projections with storm scenarios, the report identifies current flood risk for multiple properties with a cumulative value of over $1 billion, while long-term flooding and erosion could affect assets like infrastructure, wetlands, and wildlife habitat valued at over $39 billion. The analysis of risk is also evaluated at the municipal level for each community located on the county’s shores.

In addition to real estate loss, the assessment also evaluated potential impacts on public health due to infrastructure damage. Scenarios include:

Finally, the report outlines the short and mid-long term steps for adaptation planning:

In summer of 2018, Foster City residents passed Measure P, increasing their property tax to enhance the 8-mile levee that protects the city from bay tides. Construction may take up to two years and is scheduled to begin spring 2019.The Federal Emergency Management Agency (FEMA) deemed the current structure insufficient to prevent flooding during a 1% annual chance storm. Though Foster City now resides in a flood zone, FEMA has placed a temporary hold on flood insurance requirements to allow the city to make improvements. The $90 million project requires approval from the federal government as well as several state and regional entities (Daily Journal, 2018).

In preparation for climate impacts, SFO identified system deficiencies, which led to the adoption of the 2015 Shoreline Protection Program (SPP), guiding preparation for SLR and a 1% annual chance storm. In 2016, a Conceptual Design report explored alternatives based on 2012 science. The final report will be informed by the State of California Sea Level Rise Guidance 2018 document. SFO started the environmental permitting process in June 2018.

The San Francisquito Creek watershed, which crosses major transit corridors and falls between county and city lines, is increasingly susceptible to flooding. The SFCJPA was formed to spearhead improvement projects in collaboration with neighboring municipalities and other agencies, such as Caltrans and the U.S. Fish and Wildlife Service.

In 2018, the agency implemented the final phase of a creek reconstruction project in East Palo Alto and Palo Alto to create marsh habitat and recreational areas. Other projects in the works include a bridge replacement to increase traffic flow and floodwater capacity as well as upstream ecosystem restoration, flood protection, and recreation development.

Over half of California’s methane emissions are from cattle and dairy farms (CalCAN, 2015). To decrease the carbon footprint of cattle products, ranchers and dairy producers are developing a suite of best practices.

Co-digestion of manure and other waste streams is a method to reduce methane emissions, extract reusable water, and create fertilizer. This method is practiced at Straus Family Creamery in Petaluma, CA. Research has shown that dry manure management has the potential to reduce methane emissions and reduce contamination of food and soil compared to wet management practices; however, dry manure management requires more labor.

Local ranches, such as LeftCoast Grass-fed at TomKat Ranch and Markegard Family Grass-fed, implement Holistic Management systems that preserve grassland and contribute to carbon storage. In this system, cattle eat grass and trim the top to stimulate new growth, while fertilizing the land with manure. The cows are then moved to a new swath of grass or pasture to begin the process again. This practice is also beneficial for habitat conservation where riparian areas are maintained; and carbon sequestration is enhanced where perennial grasses exist.