In San Mateo County and in the United States, the history of transportation over the last 200 years has been a race to travel farther and faster. Transportation innovations helped transform San Mateo County from a quiet, pastoral area with a population of several thousand residents who mainly raised cattle and farmed to the dynamic region it is today – home to over 740,000 people and large corporations like Genentech, Facebook, Oracle, and Visa. The street patterns, downtowns, business and industrial areas, and neighborhoods in our County all have their unique character depending on whether they were built in the era of stagecoaches, railroads, streetcars, or automobiles.

“Transportation determines the flow of population. Before you can hope to get people to live anywhere…you must first of all show them that they can get there quickly, comfortably and, above all, cheaply.” – J.D. Spreckels, California Entrepreneur, c. 1900 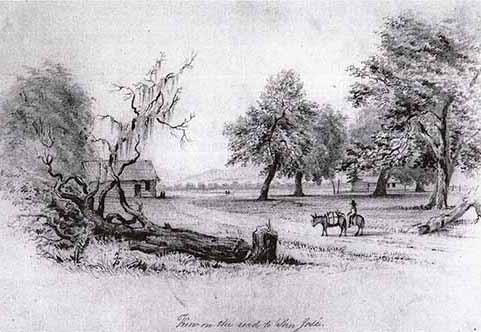 On the Road to San Jose (1850), near present day Belmont. Image courtesy of the Archives of the San Mateo County History Museum.

Prior to the 19th century, travel in America was difficult. People walked or relied on energy from animals (horse wagons or carriages) to move about. With no paved roads and few navigable waterways, most Americans lived their entire lives close to home. Longer-distance travel was mostly on waterways, which meant that larger settlements were along the coasts and on rivers.

San Mateo County’s first major trails were built by the Ohlone Indians and Spanish settlers. Between 1769-1798, Spanish missionaries created the El Camino Real or Royal Highway, a dirt trail linking missions up and down California. These missions were about a day’s travel apart. During the time of the missions and the Rancho period, the primary commerce throughout the peninsula was farming and cattle rearing for the hide and tallow trade.

The discovery of gold in 1848 brought tremendous growth to the region. By 1849, San Francisco’s population had boomed, making it the largest city in the west. In 1849, a stagecoach line was built to link San Francisco with San Jose. The line ran down El Camino Real, had no schedule, and cost two ounces of gold per ride (equivalent to $32 at that time). In good weather, the trip would take about nine hours as there were creek crossings and rough roads. With rain, the trip was nearly impossible. 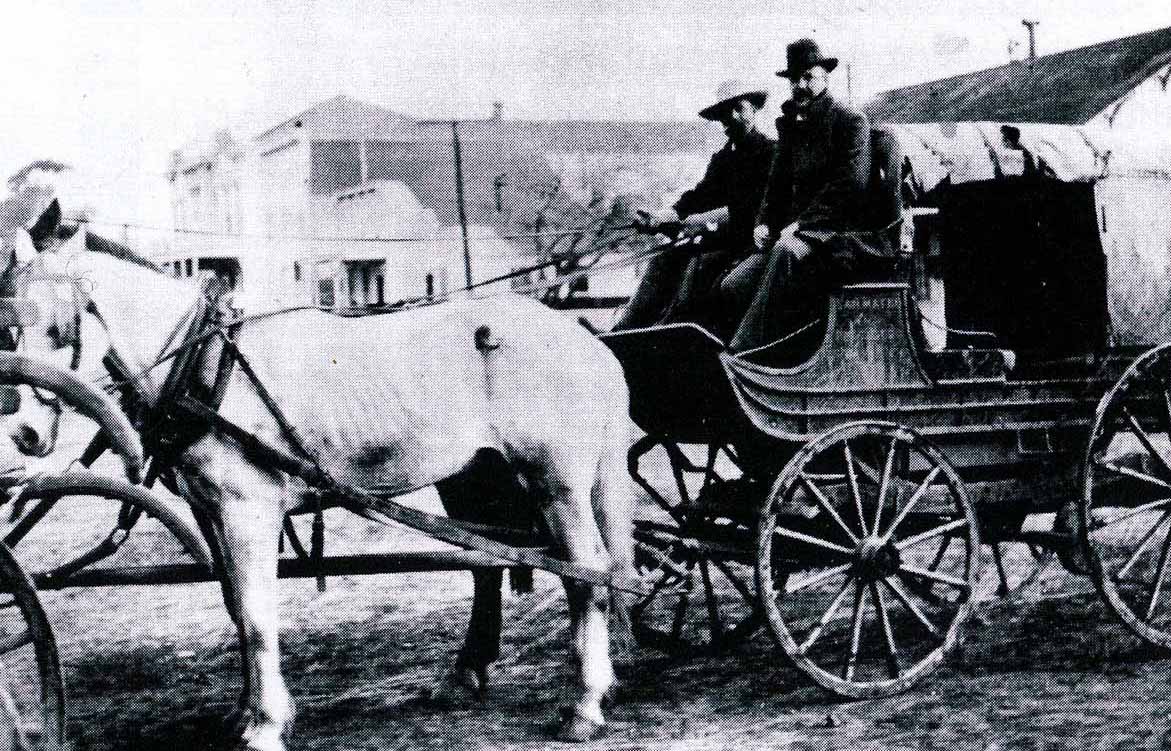 The stagecoach line brought new development down the peninsula. Stage stops or Mile Houses were built to break the trip into stages. At these stops, passengers could rest and fresh horses were hitched to the wagons. Many of these Mile Houses turned into hotels, restaurants, stores, post offices and saloons, and some of the original communities of the County, such as South San Francisco, Daly City, Colma, San Bruno, Millbrae, San Mateo, Belmont, Redwood City, and Menlo Park developed around them The mile houses were named by the number of miles they were from the starting point in San Francisco, with the house in San Mateo named the Halfway House as it lay roughly equidistant between San Francisco and San Jose. 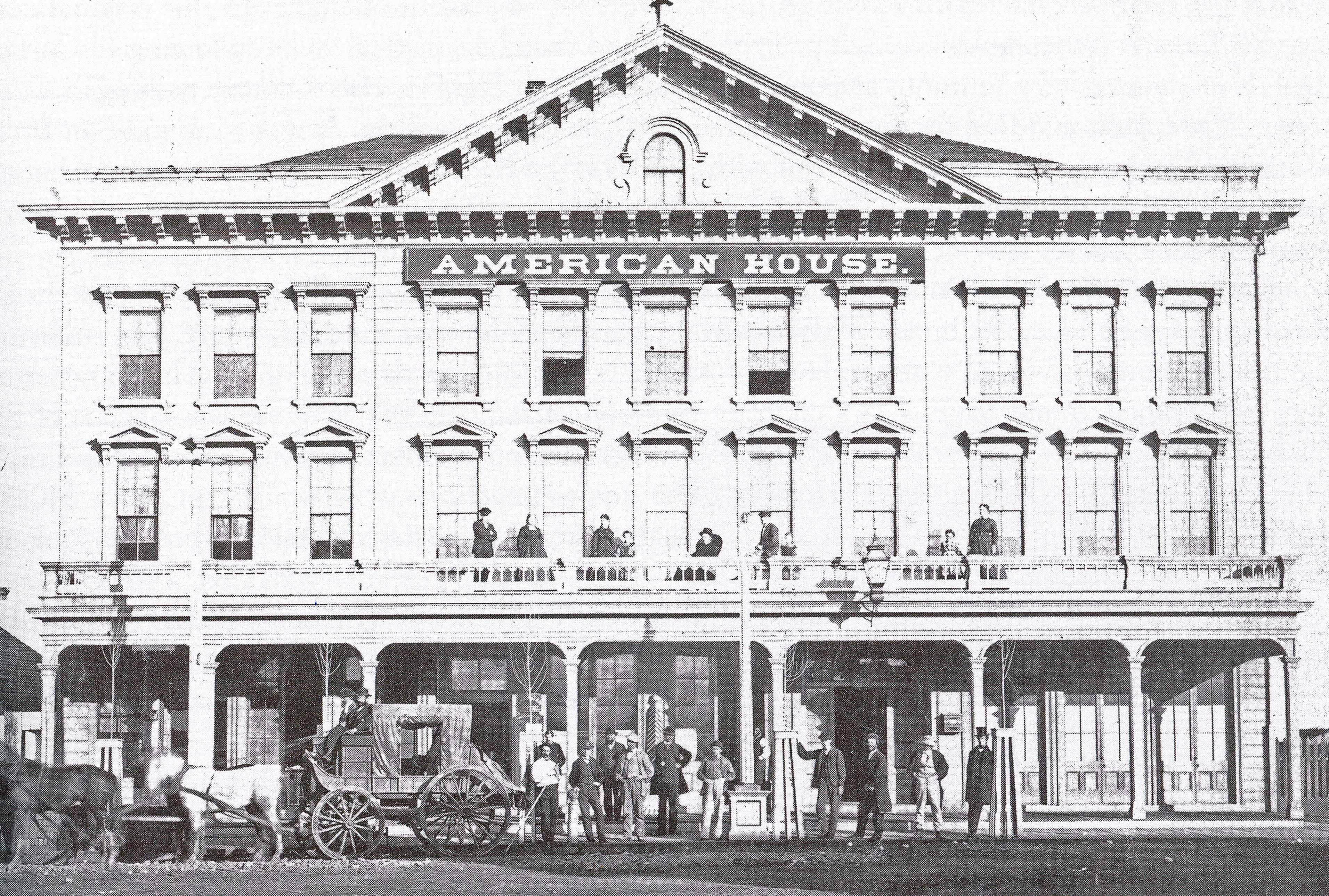 The American House at Redwood City. Image courtesy of the Archives of the San Mateo County History Museum.

The arrival of the San Francisco – San Jose railroad in 1863 ended the north-south stagecoach runs. Stagecoaches continued to operate for many years, however, as they provided important an important east-west transportation link between the bayside areas and the towns in the redwood and coastal areas.

The first commercial railways in the United States, powered with steam locomotives, opened in the 1830s. As new lines were laid across the country, cities and towns sprang up along their paths. In 1840 there were 3,000 miles of railroad; by 1860 there were 30,000.

In 1864, The San Francisco and San Jose Railroad Company opened. This was the first passenger railroad west of the Mississippi, and with its arrival, San Mateo County developed as the first rail suburb on the west coast. The fare from San Mateo to San Francisco was 75 cents (average worker pay at this time was $1.00 per day), and the run time from San Francisco to San Jose was two hours and 20 minutes. The high fare and infrequent service (the first train arrived in San Francisco at 9AM and the last train departed by 4PM) meant that trains could only be a commute option for the very wealthy. 1860 San Mateo County population: 3,214. 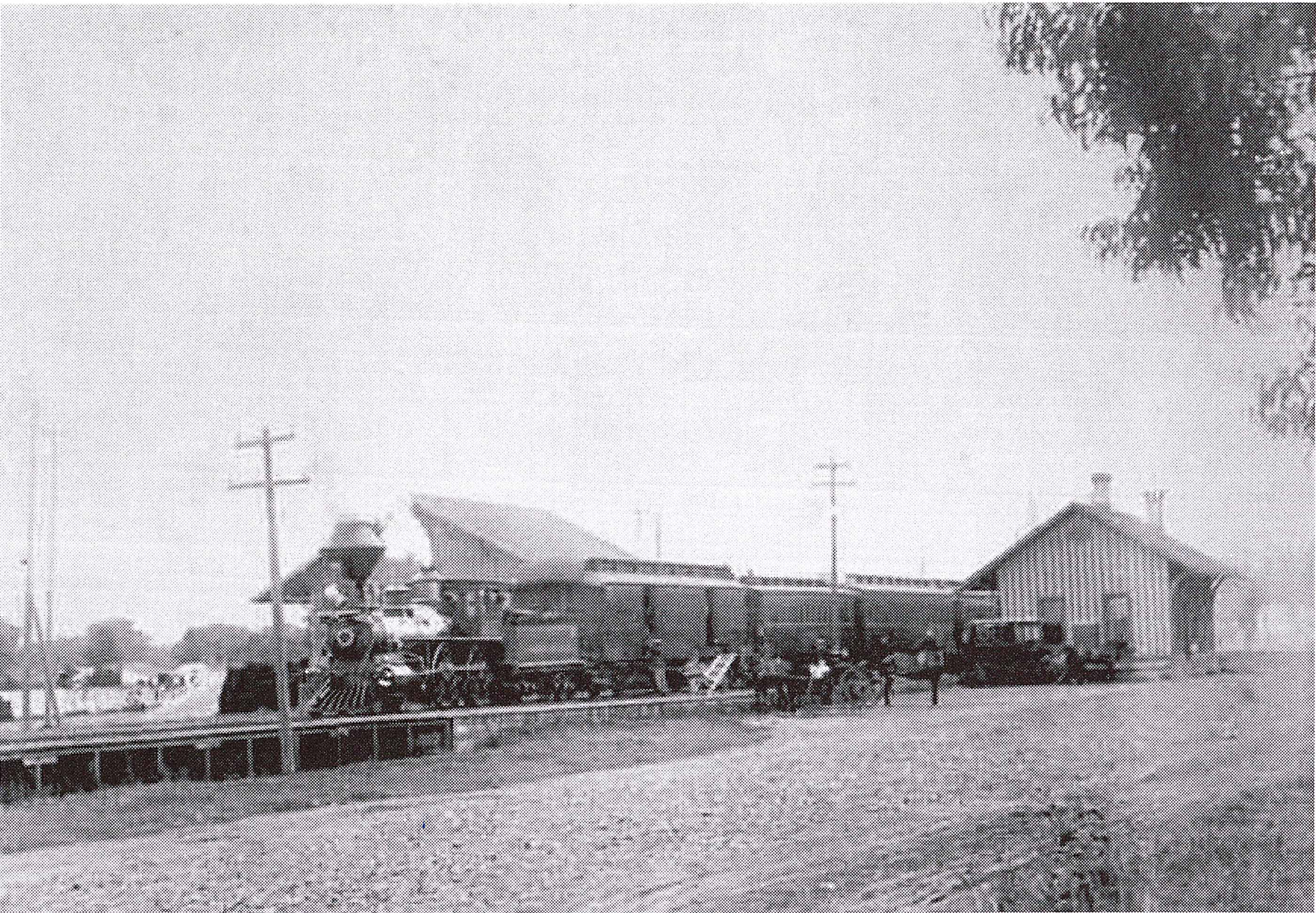 With the opening of the Railroad through San Mateo County, the population grew, but not by much. The estate owners’ large landholdings took up so much space near the train stations that they prevented development and kept the towns from expanding. 1870 San Mateo County population: 6,635. 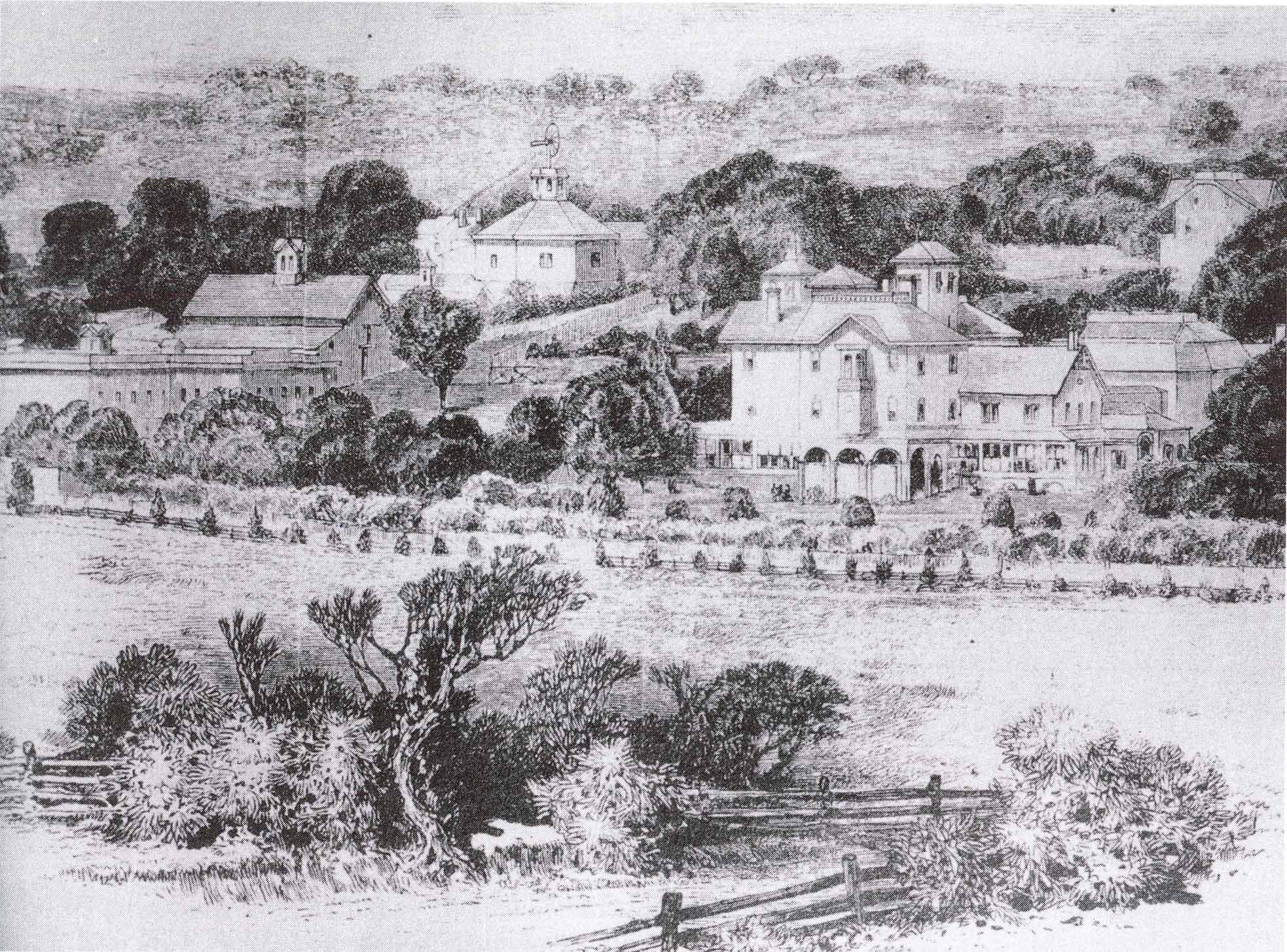 The 55,000 square foot Ralston Mansion in Belmont, c. 1870. Photo courtesy of the Archives of the San Mateo County History Museum.

In 1869, the Transcontinental Railroad was completed, and a journey across the country that once took months of difficult and often dangerous travel over rocky trails could now be made in six days. The railroads opened up California to the rest of the nation, enabling economic growth and also bringing new visitors and residents to the golden state. In 1870, the Southern Pacific Railroad took over the San Francisco and San Jose Railroad Company. They doubled the track line, which allowed for more service, and created the BayShore cutoff in 1907, which decreased travel time. This is the current route of Caltrain. 1880 San Mateo County population: 8,669

Towards the end of the 19th century, the growing middle class in San Francisco wanted to live like the elite and have a suburban life. To achieve this, they needed affordable housing and transportation. In 1889, William Howard subdivided part of his estate in the City of San Mateo, which provided smaller plots of land to be sold for housing for middle class families. 1890 San Mateo County population: 10,087. 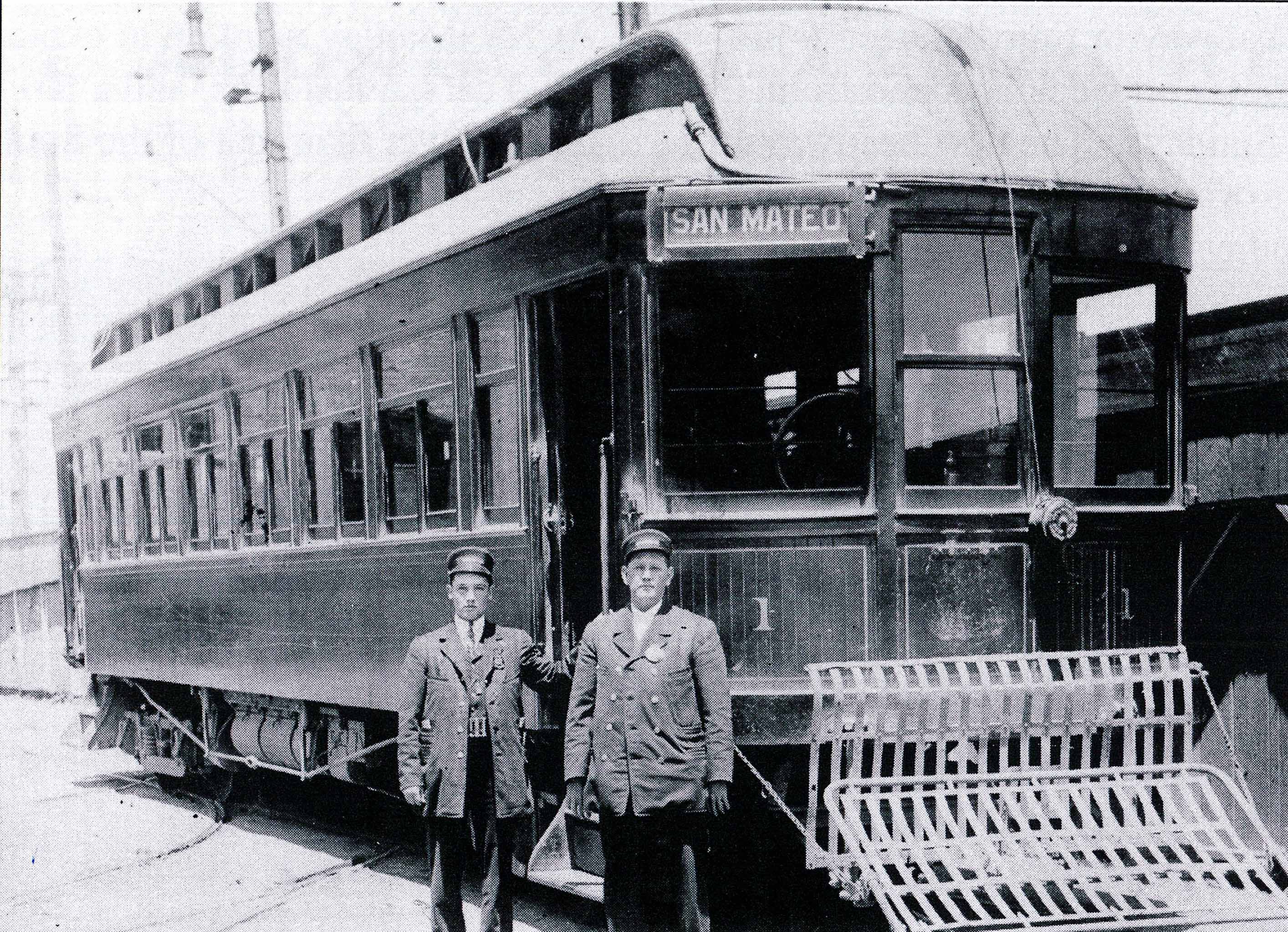 Streetcar conductors on the route to San Mateo. Photo courtesy of the Archives of the San Mateo County History Museum.

While the streetcar started to bring middle class families to the peninsula, the 1906 earthquake led to a population influx. Many San Franciscans fled the devastation of the earthquake and subsequent fire and came to the peninsula. The streetcar made it easy for many of them to stay here and commute to jobs in San Francisco. The towns from San Mateo North with streetcar stops saw especially large growth during this time, while the towns south of San Mateo barely grew. 1910 San Mateo County population: 26,585.

At the start of the 20th century, nearly all roads in the country were unpaved. Dirt roads made travel on bicycles and stagecoach difficult and waste from horses was a considerable nuisance and health threat in cities. A coalition of bicyclists and health reformers banded together to lobby for paving roads. The bicyclists wanted smoother rides, while the health reformers wanted cleaner cities. Farmers also pushed for road paving as this allowed them easier connections to markets to sell their goods. The arrival of the automobile, however, made road paving essential. In 1900, there were 8,000 cars in America; by 1920 there were 8 million. The early cars were steam and electric, but the internal combustion engine eventually won out because it was more efficient and lighter, and new oil discoveries meant this was at the time an abundant energy source.

In 1911, San Mateo County officials begin advocating for better roads. In 1912, the first California state highway was paved in San Mateo County. It is five miles of road between San Bruno and Burlingame. In 1913, residents in San Mateo County passed a $1.2 million bond so that the County could match state grants and create more roadways for automobiles. County residents gradually switched from streetcar ridership to car ownership as more roads were paved. Automobiles were a faster and more convenient way for people and goods to travel, and they enabled people to live further from the rail corridor and from work and shopping areas. The 1920s saw a flurry of road construction projects in the county: Skyline Boulevard, The Bayshore Highway (now known as 101), The Dumbarton Bridge, and The San Mateo-Hayward Bridge. 1930 San Mateo County population: 77,405. 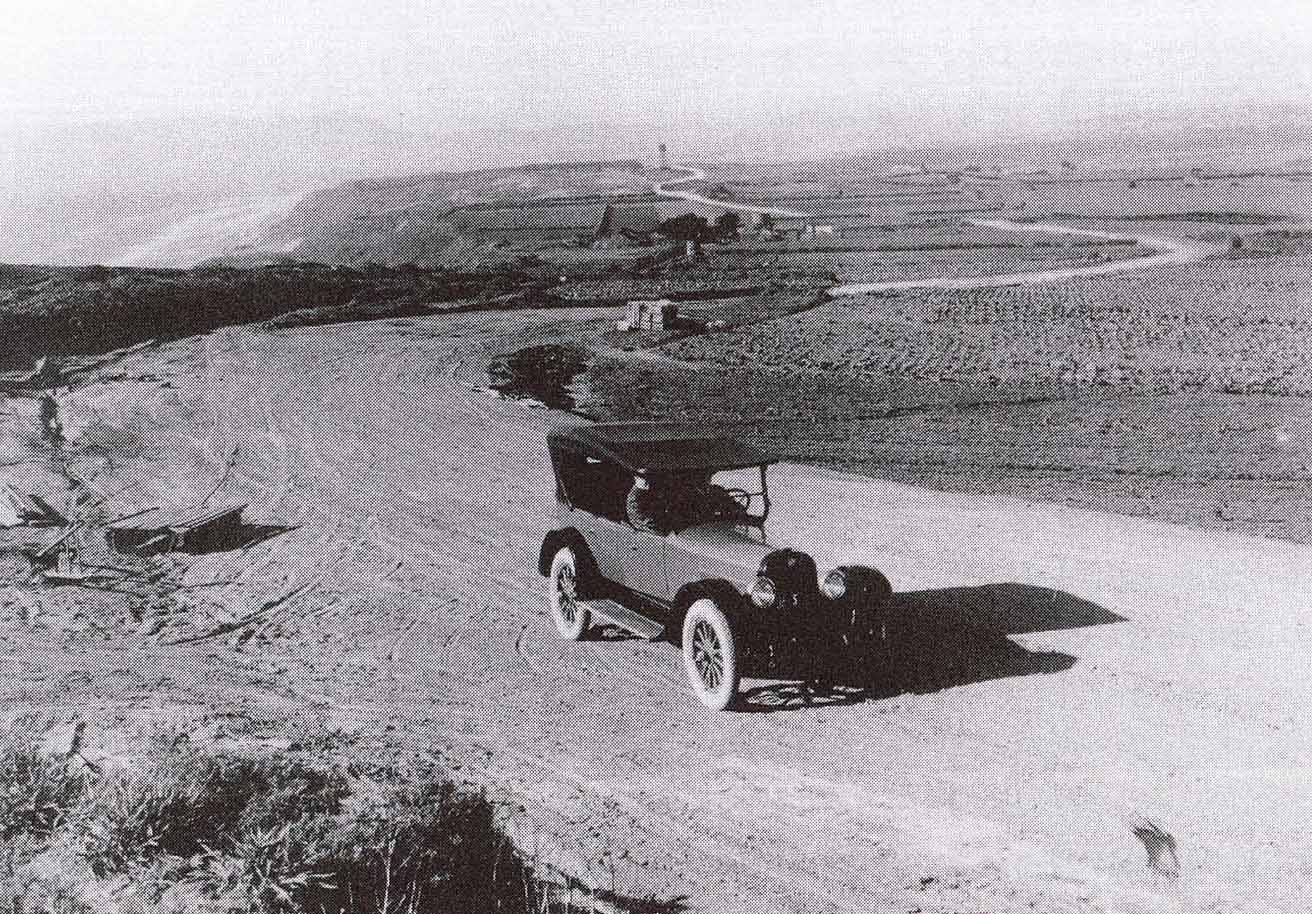 Skyline in Daly City in the 1920s. Photo courtesy of the Archives of the San Mateo County History Museum. 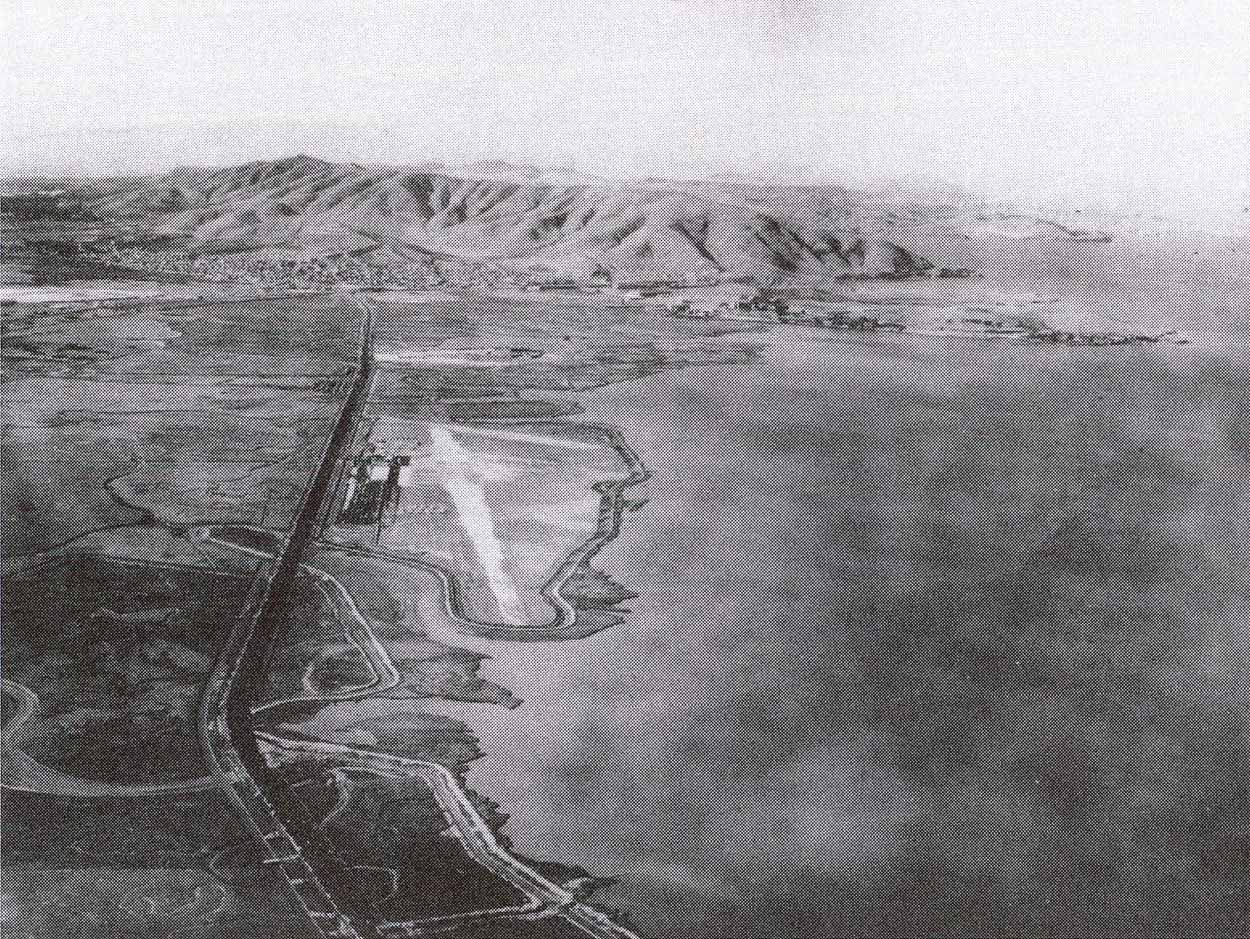 By the 1940s, the car culture had changed the local landscape, with paved roads allowing for travel throughout San Mateo County. New businesses, such as gas stations, repair shops, restaurants, and automobile dealers, opened to service the needs of car owners. The growth of the automobile meant fewer people were riding the streetcars. During World War II, streetcar ridership dropped sharply; by 1949, streetcar service in the County was discontinued, and the tracks were torn up. 1940 San Mateo County population: 111,782. 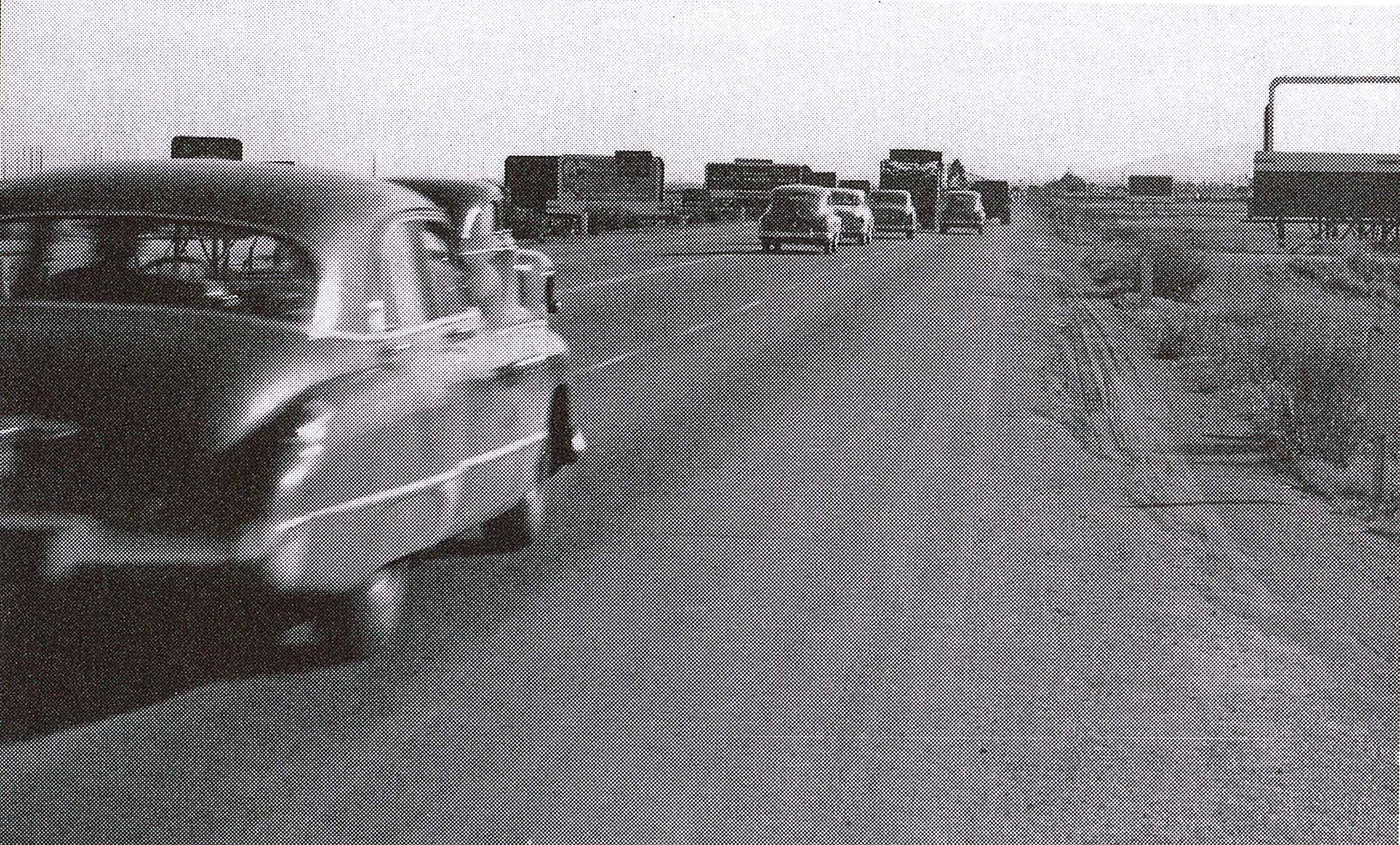 The Bayshore Freeway near Bay Meadows in the early 1950’s. Photo courtesy of the Archives of the San Mateo County History Museum.

Post WWII, the County experienced tremendous growth in population and housing. During the War, war-related industries like ship making and steel building came to the County, bringing jobs and more people. In the post-war period, commercial aviation grew, and San Francisco Airport brought jobs and helped spur development of the electronics industry; companies like EIMAC, Victor and Litton Industries started up in the County. 1950 San Mateo County population: 235,659.

In 1956, the Eisenhower Federal Aid Highway Act passed, creating our Interstate Highway System and more than 40,000 miles of roads throughout the U.S. With more people traveling by car and airplane and transportation investment focused on air and car, passenger train travel declined. 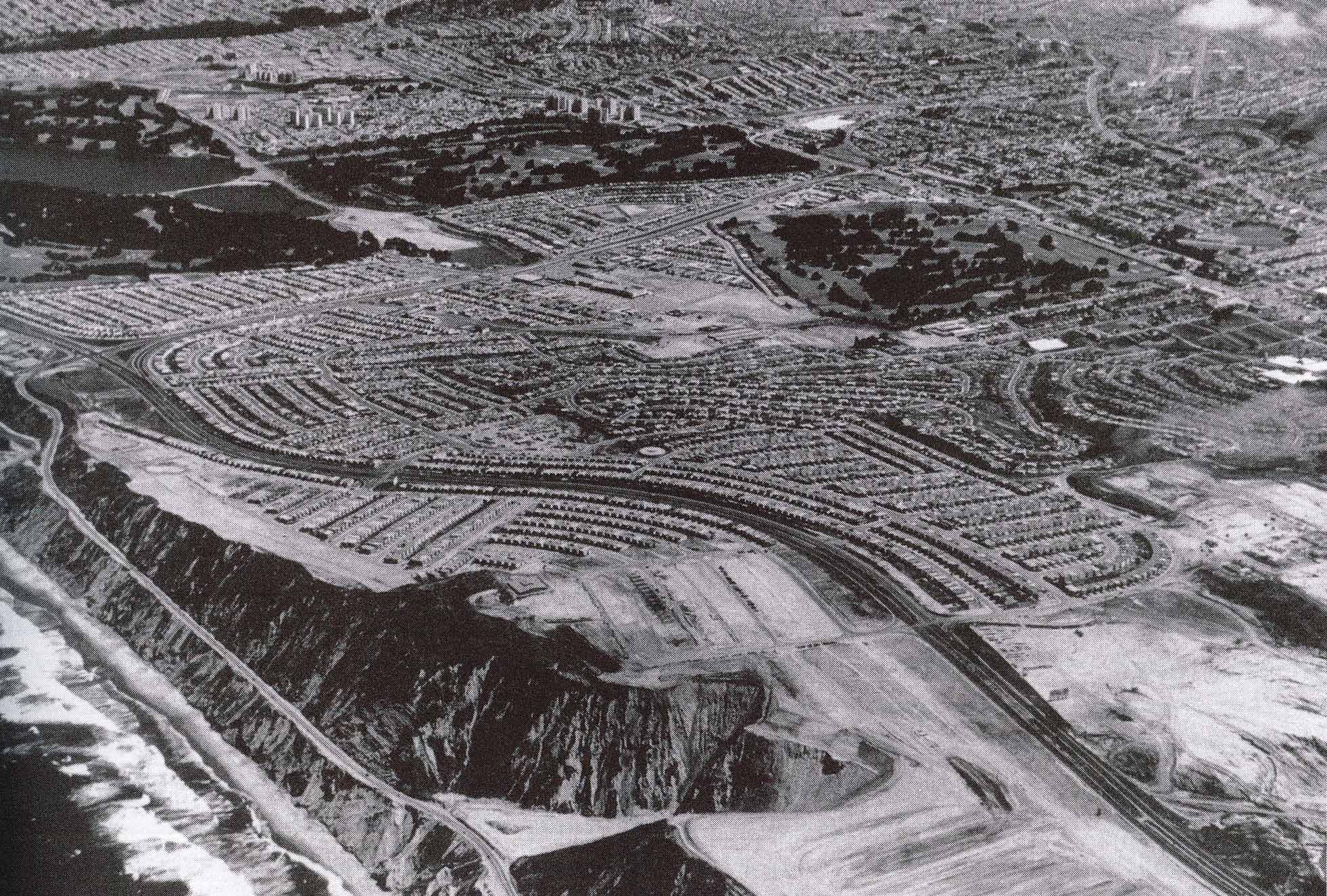 The Westlake District in Daly City. Photo courtesy of the Archives of the San Mateo County History Museum.

The Arab Oil Embargo of 1973-74 brought rising gas price and long lines at gas stations to the entire country. In San Mateo, this led to growing public sentiment about the need for a comprehensive public transit system. In the early 1970’s, 11 separate cities in the County had their own small bus systems. In 1974 county voters approved forming the San Mateo County Transit District (SamTrans), which brought these separate city bus lines together into one system. In 1977, SamTrans bought Greyhound’s local bus fleet, and by 1980, they had more than 200 buses. 1970 San Mateo County population: 556,234. 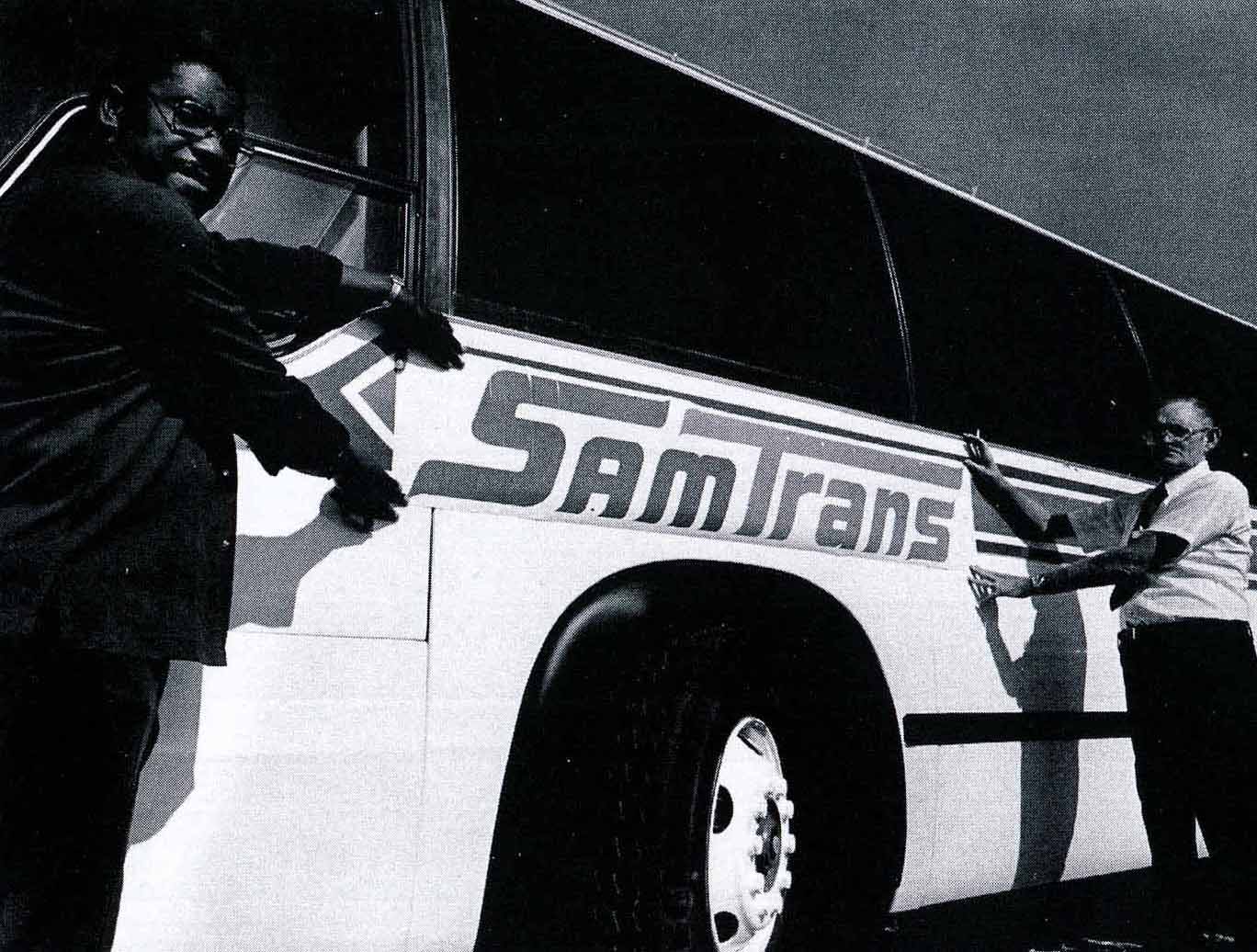 An early SamTrans bus in 1976. Photo courtesy of the Archives of the San Mateo County History Museum.

With few passengers traveling by rail, the Southern Pacific line was losing money. In 1977, faced with an operating deficit, Southern Pacific asked the California Public Utilities Commission if it could discontinue service. In 1980, local counties created Caltrain and took over service. In 1992 the Peninsula Corridors Joint Powers Board (JPB) formed and contracted with Amtrak to provide passenger service

The idea for Bay Area Rapid Transit (BART) first began in 1947, when a military review board recommended linking San Francisco and Oakland via an underwater tube. During the BART planning phase, San Mateo County Supervisors voted not to participating, citing higher property taxes and existing Southern Pacific Railroad service. BART construction started in 1964, with the Transbay Tube completed in 1969 and passenger service starting in 1972. Originally, the final stop south of San Francisco was Daly City. In 1996, the Colma station was opened, and in 2003, BART service extended to San Francisco Airport and Millbrae.

Closing Thoughts
Especially for people born after 1970, it’s hard to imagine our transportation systems looking any different than they do today. All that we have ever known is the current maze of freeways and local streets full of cars. But, if you take a longer-view and see the dramatic transformation to our landscape and transportation systems over the past 200 years, it’s easier to see that change is inevitable. If history serves as a guide, the only sure thing about the transportation systems of the future is that they will likely be very different from what we currently have.