Agricultural land is a vital resource for the provision of sustenance to humans and habitat for wildlife. Sustainable management practices are essential for the effective use of working lands, which support ecosystems on a local and global level.

As one of the nation’s largest agricultural producers, California is in position to be a pioneer of sustainable agriculture practices. Local research on crop rotation, holistic management of pastures, water-efficient farming, and carbon storage in soil help to establish best practices that go beyond greenhouse gas emission reduction.

Farmers and ranchers are dedicated to practices that conserve natural resources and reduce greenhouse gas emissions. Government policies reward sustainable agricultural production and discourage other activities that lead to climate change. Agricultural land is protected and supports production of edible crops and healthy soil. Local water sources are efficiently managed and benefit from the reduced use of chemical pesticides, fungicides, and fertilizers. Conservation practices monitor and support habitat for native species.

Global weather measurements indicate that 2015 was the hottest year on record. As shown in the chart below, the warming trend was present in the Central Coast region (which includes San Mateo County). 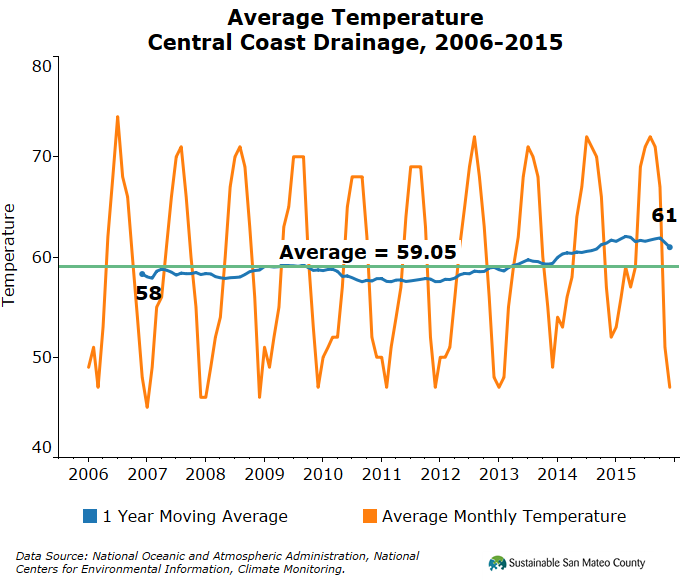 Climate is a major factor in agricultural crop production. Plant growth is determined by atmospheric temperature, humidity, moisture, and nutrients (carbon, nitrogen, etc.). Crops are selected for compatibility with the local climate and fluctuations may require a shift in production. Shown below are examples of how climate affects agriculture, drought, and other resources.

Many of the state’s farmers and the organizations that support them are developing techniques to reduce the carbon footprint of farming and enhance resilience to climate change. The California Climate and Agriculture Network and the Natural Resource Conservation Service circulate information about best practices in farming, from water efficiency to soil integrity.

Over half of California’s methane emissions are from cattle and dairy farms (CalCAN, 2015). To decrease the carbon footprint of cattle products, ranchers and dairy producers are developing a suite of best practices.

Co-digestion of manure and other waste streams is a method to reduce methane emissions, extract reusable water, and create fertilizer. This method is practiced at Straus Family Creamery in Petaluma, CA. Research has shown that dry manure management has the potential to reduce methane emissions and reduce contamination of food and soil compared to wet management practices; however, dry manure management requires more labor.

Local ranches, such as LeftCoast Grass-fed at TomKat Ranch and Markegard Family Grass-fed, implement Holistic Management systems that preserve grassland and contribute to carbon storage. In this system, cattle eat grass and trim the top to stimulate new growth, while fertilizing the land with manure. The cows are then moved to a new swath of grass or pasture to begin the process again. This practice is also beneficial for habitat conservation where riparian areas are maintained; and carbon sequestration is enhanced where perennial grasses exist.

San Mateo County’s agricultural conservation practices are stringent and effective. In October 2007, the county passed the Agricultural Awareness Ordinance, a policy directive to “conserve, protect, and encourage agricultural operations on agricultural land within the county.” In pursuit of this goal, the ordinance established a grievances process to address public concerns regarding agricultural practices.

The County’s General Plan in combination with the Local Coastal Program (LCP) restrict development in rural, coastal areas and on land suitable for agriculture. The Planned Agricultural District (PAD) safeguards against the subdivision of agricultural land and restricts use to farming.

In spite of conservation efforts, SPUR reports that 7% of farmland and 1% of San Mateo County’s pasture is at risk of conversion. The California Department of Land Conservation monitors the conversion of various types of land use. 304 acres of prime, unique, and historic farmland were converted between 2012 and 2014 with the majority transformed to pasture.

The Peninsula Open Space Trust (POST) supports farmland conservation through the purchase of agricultural land and the establishment of conservation easements, which legally restrict the use of land. Farmland may also be protected by an affirmative easement, set by a landowner, prescribing a set of activities allowed on the land. The Williamson Act is an agricultural land conservation tool that offers owners a reduced tax rate for restricting use of their land for a minimum of 10 years. Options to purchase agricultural value (OPVA) is a mechanism that calculates a lower value for agricultural land compared to a market rate inflated by potential commercial development. POST seeks to triple the number of protected farms and farm acreage along the peninsula within 10 years.

Soil received an international spotlight when the Food and Agriculture Organization of the United Nations named 2015 the Year of Soil. Healthy soil is characterized by high levels of soil organic matter (SOM), microorganisms, insects, and other forms of life, which make soil the source of a quarter of the earth’s biodiversity.

SOM is protected by soil structure that is not compromised by over tilling. Cover crops are used to prevent soil erosion in fields between plantings of cash crops. The roots of some cover crops and perennial gases are effective tools for carbon storage.

According to the American Farmland Trust, half of the world’s topsoil has been lost to development and poor soil management over the past 150 years; 1.7 billion tons of topsoil a year in the US alone. Industrial agriculture practices that involve excessive plowing and monoculture farming cause soil erosion, and chemical fertilizers and pesticides pollute soil and reduce the amount of SOM.

Synthetic fertilizers are harmful to watersheds. Farm run-off containing excess nitrogen and phosphorous promotes the growth of algae in waterways and water outlets such as the coast. The algae can become a source of toxic food for fish or its decomposition may deplete oxygen levels in water, effectively suffocating fish and aquatic life.

California’s state government is on the verge of implementing a new Healthy Soils Initiative intended to fund projects that:

Point Blue Conservation Science in collaboration with TomKat Ranch produced an evaluation of the coastal habitat surrounding Pescadero, CA. The study revealed that there are 206 native species present in the area. 107 of these species breed in the habitat. The California red-legged frog is identified as threatened by the federal government while the San Francisco Garter Snake is classified as endangered.

Nine of these native creatures are on the California Department of Fish and Wildlife Species of Special Concern list.

The following species were introduced into the area:

*The American Bullfrog is a predator for the California red-legged frog.

The San Mateo County Resource Conservation District implements various projects that support watersheds and the endangered species that inhabit them. Recent projects include the Alpine Creek Fish Passage, a remediation project that will enable Coho salmon and Steelhead trout to access 3 miles of habitat, and the San Gregorio Creek Habitat Enhancement Project, which will provide breeding grounds for these fish.

Pollinators play a vital role in seed and fruit production, as well as biodiversity maintenance and ecosystem health. Though pollination may be performed by the wind and by humans, many plants rely on birds, bees, bats, butterflies, moths, beetles, or other animals to facilitate reproduction. These creatures also play a role in pest management. On a global scale, the ecosystem services provided by pollinators are valued in billions of dollars.

According to the Pollinator Partnership, local almonds, blackberries, cucumbers, and artichokes, among other crops, depend on honeybees and native bees for pollination services. In return, pollinators require wholesome habitats, free of invasive plant and animal species, harmful chemical pesticides and fertilizers, and parasites. View the guidelines on Selecting Plants for Pollinators in the California Coastal Chaparral Forest and Shrub Province to learn how to create a healthy habitat in your environment.

In a recent study, the Intergovernmental Science-Policy Platform on Biodiversity and Ecosystem Services (IPBES), found that globally 16% of vertebrate (birds and bats) and 9% of bee and butterfly species are at risk of extinction. Land use practices employed in large-scale agriculture are cited as contributing factors in habitat loss and lifestyle interruption of these creatures, as cover crops and wildflowers are eliminated and pesticides introduce toxins into the pollinator food stream.

In recent years, beekeepers have raised awareness about Colony Collapse Disorder and the resulting 10% decrease in the bee population. The Xerces Society for Invertebrate Conservation reviewed a wealth of research on the effect of neonicotinoids (a specific classification of pesticide) on various types of bees. The findings confirm that these pesticide change behavior in bees as well as “make honey bees more susceptible to parasites and pathogens, including the intestinal parasite Nosema, which has been implicated as one causative factor in Colony Collapse Disorder (CCD)”(Xerces 2012). 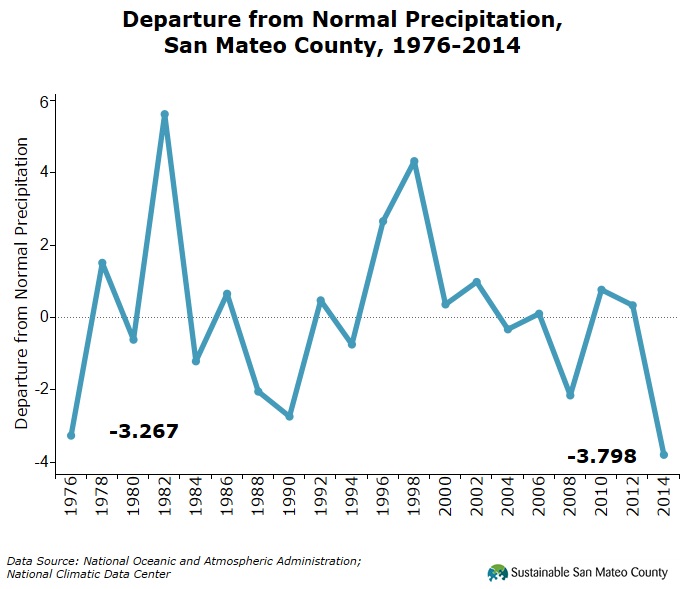 A water footprint can also be calculated at a regional level. In California, 47% of the state’s cumulative water footprint is consumed by the production of meat and dairy products, while 46% is attributed to other agricultural products (Pacific Institute, 2015).

With funding from the Coastal Conservancy, the San Mateo County Resource Conservation District has initiated an ambitious project to create 100 ponds on agricultural land on the county’s coast side. Farm ponds are used to capture rainwater, irrigation water (run-off), and storm water diverted from streams during wet seasons. The benefits of farm ponds are numerous: