Climate change will aggravate diseases and negatively impact health care systems as extreme weather events become more frequent[1]. It is important for health systems to be resilient to these events so that they can be ready to serve when needed the most. An illuminating case is that of Texas Medical Center (TMC), which learned lessons from hurricanes and tropical storms Katrina (2005), Rita (2005), and Allison (2001). These storms deluged Houston with floodwaters and cut off patients from needed medical care.  The medical center then built its own new heat and power utility plant (which, by the way, emits reduced carbon) high enough to resist flooding and installed submarine doors to protect its basement floors from incoming water. TMC managed to remain fully operational during hurricane Harvey in 2017. Read here to know more. 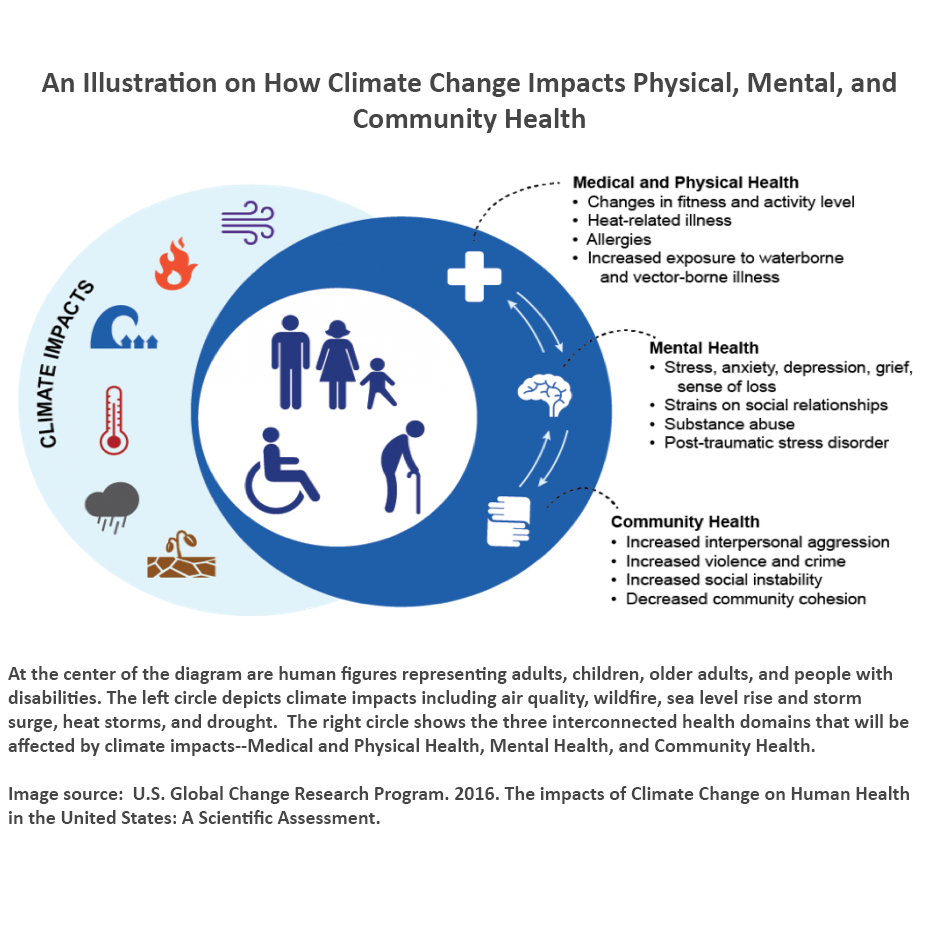 To know more about climate-change-induced health threats, please read here. To track health and environment data compiled by the Centre for Disease Control (CDC), click here. Initiatives within the Bay Area such as the Bay Area Regional Health Inequities Initiative (BARHII) are focused on building community resilience against the impacts of climate change. You can access BARHII’s quick guides that aim to build capacity of Bay Area health departments here. One of the worst affected population groups due to decline in air quality and climate change aggravated diseases are those suffering from asthma, discussed in the following section, which has witnessed a rise amongst all age groups, genders, ethnicities, and neighborhoods.

Asthma: Asthma is a chronic disease affecting the airways that carry oxygen in and out of the lungs and can cause shortness of breath, wheezing, coughing, and tightness in the chest. Asthma attacks have been linked to many factors, including exposure to environmental hazards like allergens, tobacco smoke, and indoor and outdoor air pollution. Rising temperatures can lead to an increase in ground-level ozone, smog, pollen, strength of airborne allergens, and a longer allergy season. All these factors along with air pollution can lead to both developing asthma and aggravating its incidence. The populations most vulnerable to these triggers are children, the elderly, people with lung disease, and people who are actively outdoors. To know more about asthma triggers and prevention, click here. 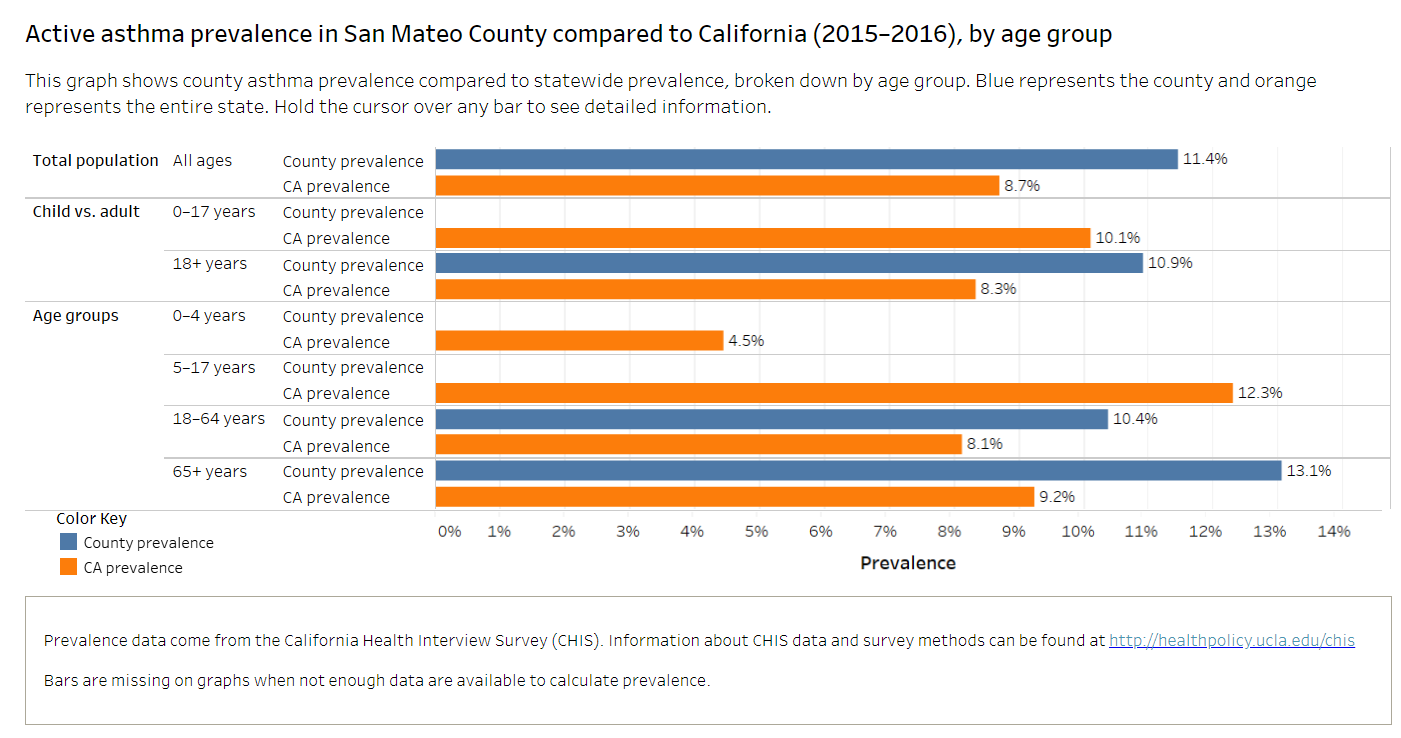 To combat health impacts of climate change, considering social equity in response and recovery is critical. Only 20% of health is attributed to clinical care (access and quality) while 40% is attributable to social and economic factors such as income, education, employment, family and social support.[3] In order to be equitable, the public agencies’ response and planning should  especially look out for populations who have limited resources to prepare and recover, including children, the elderly, lower-income residents, ethnic and linguistic minorities, those who face unstable housing conditions, and those with limited access to vehicles.

In the Social Vulnerability Index (2016), San Mateo County scored an overall score of 0.2735 (where 0 is the lowest and 2 indicates the highest vulnerability).  This score indicates a low to moderate level of vulnerability, but it should be noted per the graph at right that the populations living in North Fair Oaks and South Bay, to name a few, are socially vulnerable to disasters. Public agency response plans should address this vulnerability. 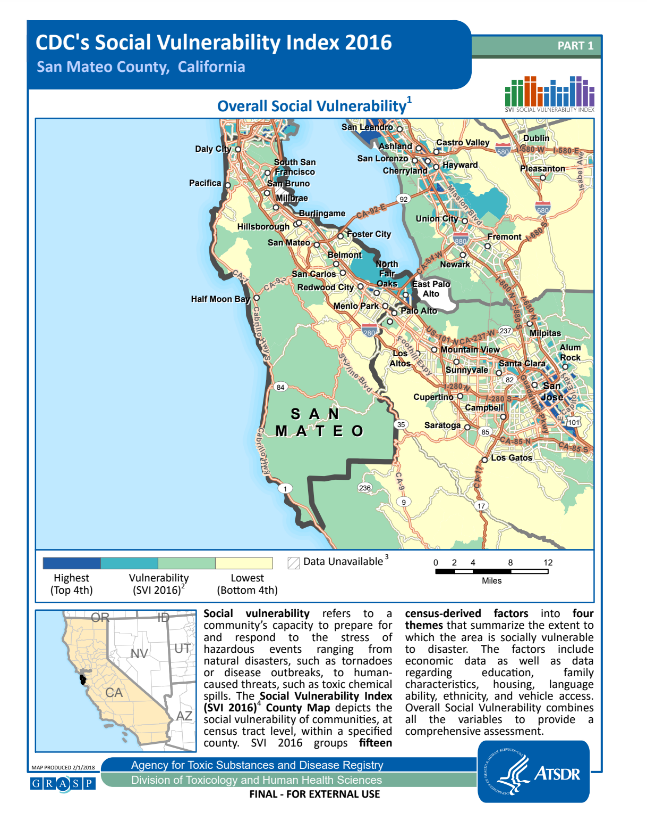 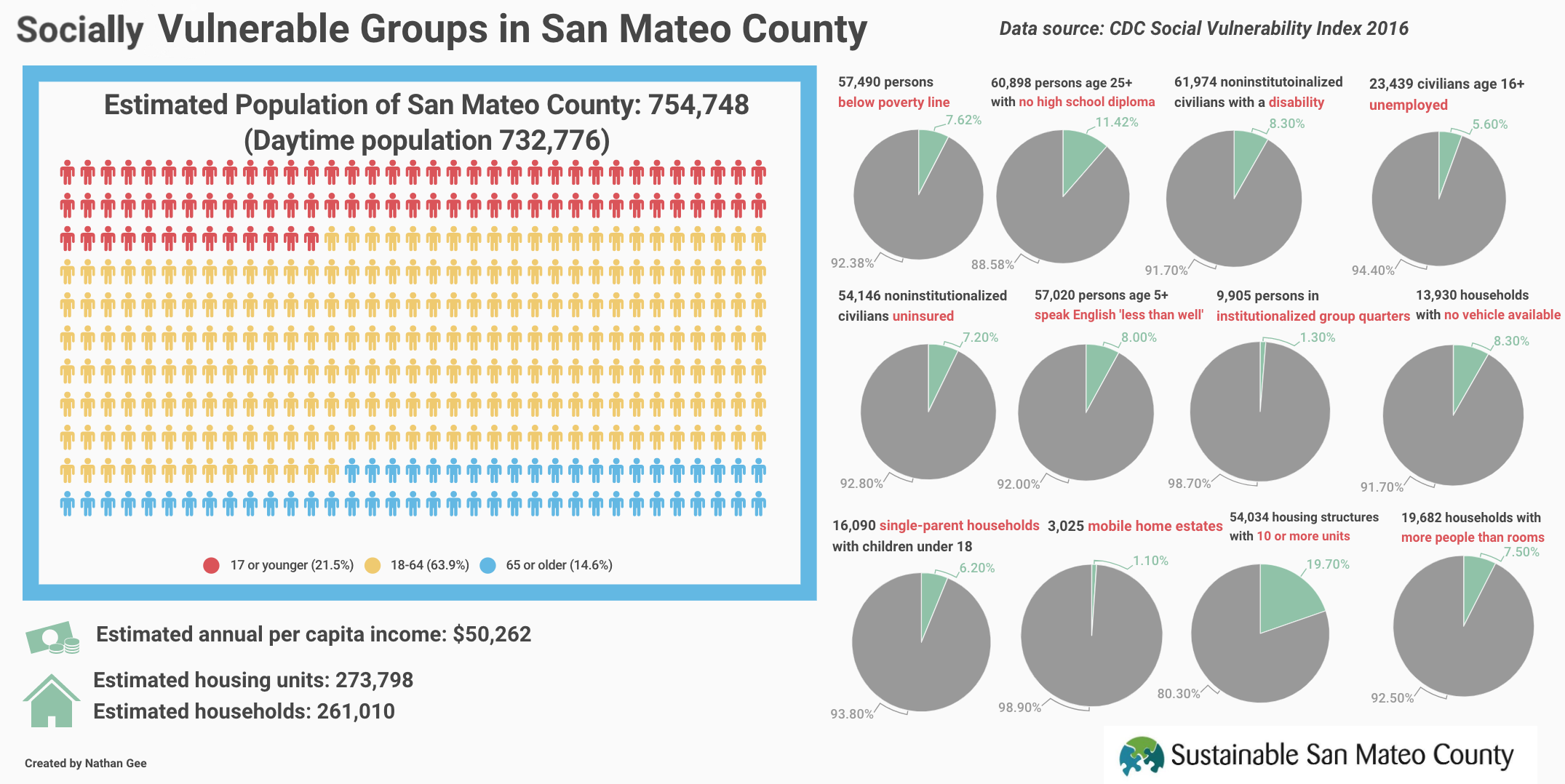 The graph above represents socially vulnerable groups in SMC that require targeted support and capacity building for climate change adaptation and resilience building.